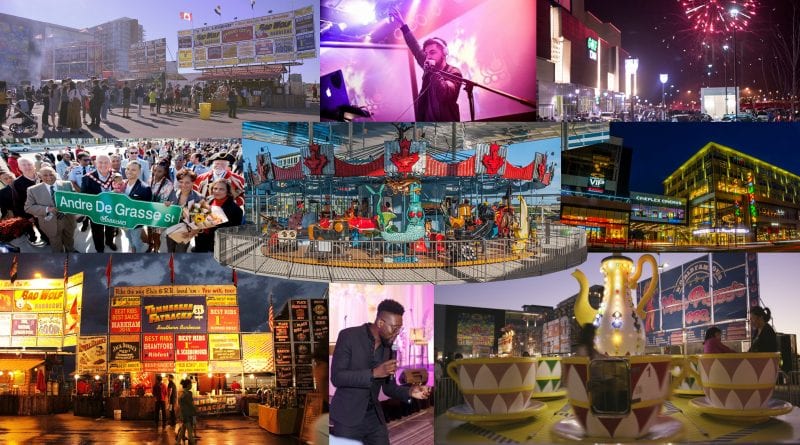 As far back as the 1990s, there was a vision for a new downtown area for Markham.

Based on the recent North American trend of arranging suburban developments creatively in order to facilitate a more urban experience, the 243-acre stretch of land south of Highway 7 centred around Birchmount Ave was tasked with becoming Downtown Markham.

The complex is now a unique destination with an eclectic mix of unique restaurants, entertainment, and residences.

“With the addition of Patisserie Fleur, along with Cacao 70 Dip Shop and Demetres, we have a deadly dessert row,” says Christina Butterfield, Director of Communications for the Remington Group who manages the complex. “That’s on top of Lucullus Bakers and Roasters and Aroma Espresso Bar, which have already become staples in the area.”

Of course, the real mark of any downtown is community and culture.

“Our real focus in Downtown Markham has been to host events that bring the community together and that highlight some of the unique cultural aspects that we offer,” says Butterfield, “Prior to the opening of the Cineplex + VIP Theatres, we hosted movie drive-in nights, with the opening of the Pride of Canada Carousel to the public in 2016, we launched free Canada Day festivities, which have become a tradition.”

These community events have come to be a regular part of life in the area.

Last year, they were named an official site for Rogers’ Hometown Hockey, and there was a street naming celebration for Markham Olympian, Andre DeGrasse. This was on the same block where an Olympic viewing party was held in 2016 to watch DeGrasse win three medals.

This past summer saw the launch of Sounds of Summer, a live music series in partnership with some of the restaurants and the Toronto Marriott Markham, which was so successful that there is a plan to expand on it this year. For foodies, Downtown Markham has begun to emerge as a real food destination, so they are naturally going to program a series of food experiences later this year.

With this summer coming up, plans are underway to continue these traditions and add a few more.

“We are looking forward to the return of Markham Ribfest,” continues Butterfield, “which has been a highlight the last few years that also gives back to the community through the charities supported by the Rotary Club of Markham, Sunrise.”

The annual ribfest features a line-up of championship “ribbers”, a host of food trucks, live music, the beer garden, and a kids zone. Ribfest takes over the east parking lot from July 5-7.

As with previous years, the Pride of Canada Carousel offers Sunday Fundays from noon till 4 p.m. on the last Sunday of each month. There will be free carousel rides with crafts and activities sponsored by the City of Markham.

More events will be featured throughout the summer too. The aforementioned Sounds of Summer music series will be checking into various restaurants, bars, and venues. There’s Go For Tea featuring live jazz on the last Saturday evening of every month, as well as live DJs each weekend at Costa Sorrento and the Good Catch Boil House.

“Last year, as part of Sounds of Summer, we wrapped up the season with live music at the Pride of Canada Carousel which was a lot of fun,” Butterfield says. “We’re looking to add to that with an after-party this year with Good Catch Boilhouse.”

Look for this end of season party on August 24.

Downtown Markham likes to be called, “North America’s largest urban national park, right at your doorstep”. With a full summer of culture and community on the schedule, this is becoming more of a reality every day.