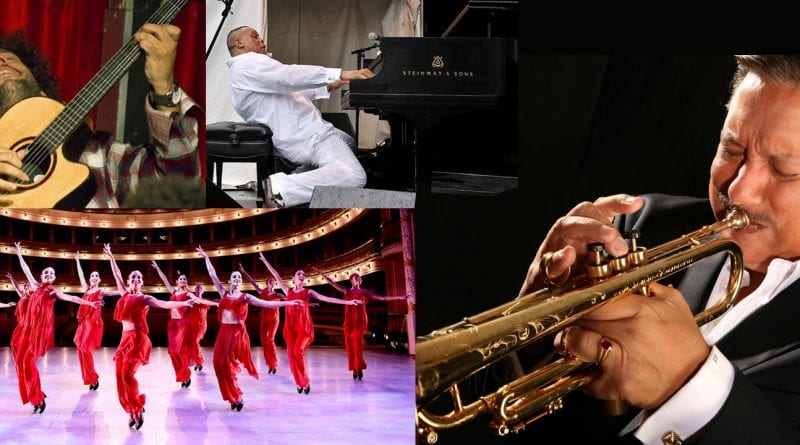 Canada’s winter weather seems to last forever. The cold here actually overstays the winter calendar by as much as a month most years, making it easy to forget about summer fun. This winter, however, the Flato Markham Theatre has a plan to keep warmer days and hot nights on the minds of music and dance lovers.

Throughout March, the unmistakably warm-weather culture of Cuba and Latin America will be featured over three performances at the theatre. More than just a reminder of warmer days, and in addition to offering  cultural insight into a complicated part of the word, these shows bring some of the most impressive musicians and dancers to the Markham theatre stage that audiences will see all season.

The trio of shows begins on March 1 with the renowned dance company, List Alfonso’s Dance Cuba, presenting a brand new production, Made in Cuba. The show promises to be a flamboyant love story that evokes every corner of Cuban life.

Dance Cuba was formed nearly two decades ago by, then 23-year-old, Alfonso. The Havana based organization has since become global cultural ambassadors for their home country and spends many months each year on tour. Performed by an all-female company of 17 dancers with eight musicians and singers, the intent of Alfonso’s work is to pay tribute to the people of her country.

“I am very happy to come to Markham and bring my Brazilian music and guitar playing,” says Figueiredo. “I am also so happy to be able to be sharing the stage with Cuba’s Chuchito Valdes and blending our music together.”

Valdes descends from Cuban music royalty via his bandleader father, Chucho Valdes, while Figueiredo is widely considered one of the most exciting artists in Latin jazz and one of the world’s greatest guitarists.

“There’s going to be a lot of flavour and a lot of improvisation,” says Figueiredo. “I expect a very relaxed and spontaneous night.”

They’ll be joined by a full rhythm section and more to keep the music jumping.

“All audiences have different feelings but the audiences in Canada are hot,” said Figueiredo. “They’re my favourite.”

Later in March, Cuban trumpeter Arturo Sandoval brings his reputation as a dynamic and exciting live performer to Markham. He began studying trumpet when he was 12, but his life changed forever when he became a protégé of the legendary master, Dizzy Gillespie. Since then, Sandoval has won ten Grammy awards, six Billboard awards and even an Emmy.

“Arturo is very much looking forward to sharing an evening with the wonderful audiences in Markham,” says Sandoval’s manager, Melody Lisman. “He’s got a great show lined up.”

In addition to his trumpet playing, the March23 evening promises to bring performances on piano, timbales and even some vocal scatting. Sandoval will even turn in a vocal on a surprise ballad.

These shows may not actually melt the snow outside, but they will give you a chance to experience a legendarily hot culture.