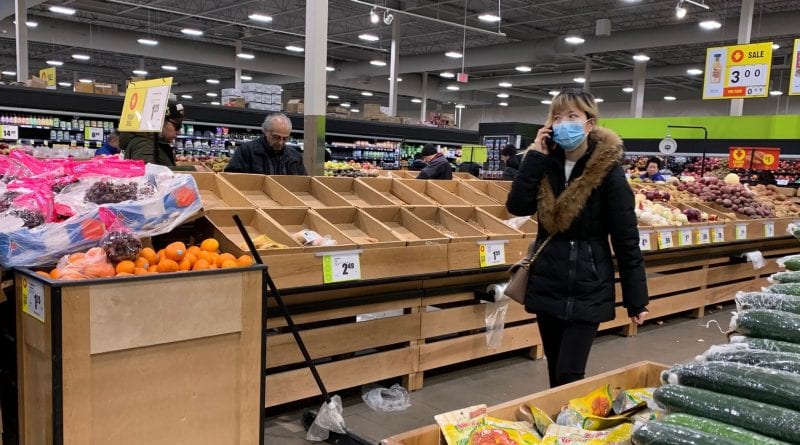 At no time has this been more true than over the last two days as Markham, Stouffville and most of the GTA, in step with much of the world, took unprecedented steps to contain a developing health emergency. But as the threats of  infection ramp up, media-assisted panic and its effects have ramped up even quicker.

Lest you think smaller communities like Stouffville might have experienced a more sane and orderly process in the societally mandated mass-isolation exercise, the raw evidence suggest this was not the case.

By mid-day, line ups had formed at grocery stores in Stouffville with management barring free access and letting waves of people in after another wave had been processed through registers. Further South in Markham, similar scenes played out with empty shelves featured where flour, meat, pasta, tomato sauce and, of course, toilet paper once stood.

At one No Frill’s store the only paper product left by late afternoon were a couple of cases of paper napkins which were disappearing quickly. Well, if you’re desperate, you’re desperate. But should we be this desperate?

The short answer from health officials was “no”. However politicians at all levels began jockeying for media space to declare their “over-abundance of caution” and shut down pretty much everything, including themselves as a wave of self-isolation started to kick in in some political circles.

By Friday night, even health officials led by Canada’s Chief Public Health Officer Theresa Tam, began revising their advice suggesting that the “social distancing” and isolation might indeed be in our best interests to “flatten the curve” of infections and calling for a ban on all large social gatherings including faith gatherings.

So here we are. Isolated in our homes with lots of toilet paper and sanitizer.

If nothing else though, isolation affords us a rare and precious opportunity to reflect a bit on ourselves. Maybe we should ask ourselves do we really need 100 rolls of toilet paper?

The stores will be restocking and remain open we are told – much like they are in other places COVID-19 has exploded. But by hoarding we’re making it  more difficult for others in our midst.

Many elderly, people with disabilities or just people without cars don’t get out very often and when they do, they buy only what they need limited by funds and available transport. With empty shelves awaiting them, tough times, will get tougher even quicker.

So spare a thought for those others at this time. Check in with neighbours and family and maybe share what you have. Community is not bricks and roads. It’s about people doing things together.

COVID-19 is a little scary, but it will pass. But it gives us a window to reflect on what role we can play in supporting and building our community. That can even involve sharing a lowly toilet roll. It doesn’t have to be grand, but it can be important.

Photo: Local grocery store shelves began to empty quickly as fears of COVID-19 ramped up faster than the actual danger.