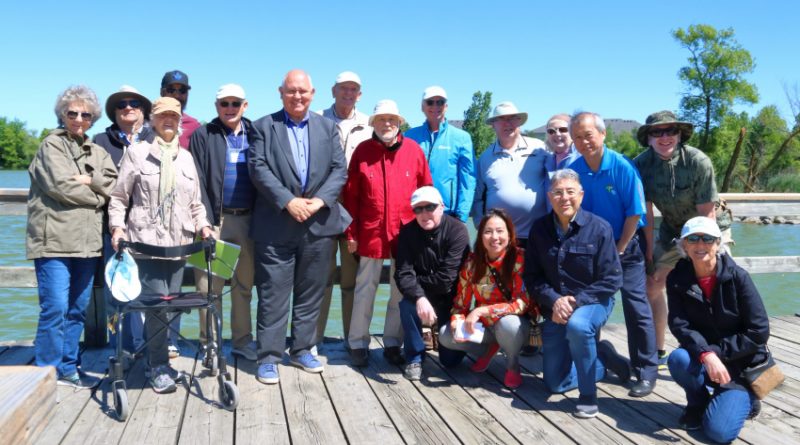 On June 18, Mayor Frank Scarpitti and councillors Joe Li, Andrew Keyes and Amanda Collucci met with members of Friends of Swan Lake to tour the lake, and discuss its past, present and future.

Concerned citizens of Markham formed Friends of Swan Lake in 2012 to develop and implement plans to restore the quality of water, protect aquatic and land-based habitat on Swan Lake. The citizen’s group has collaborated with City of Markham to achieve these goals.

Fred Peters led the guided tour of Swan Lake. He explained that the lake originated in the 1850s as a gravel pit for the construction of the railway and continued as a source of construction material until the 1970s.

Around that time, the pit punctured an underground aquifer resulting in the surfacing of fresh water. For decades the lake was unregulated and used as a dump for household and construction waste.

Peters explained that the water in Swan Lake was degraded after it was designated storm water run-off. The resulting chloride from road salt, combined with phosphorous and nitrogen from goose droppings reduced the oxygen and increased the algae.

The lake is currently a stagnant pond and there has been a significant drop in aquatic life.

During the tour, Andrew Fuyarchuk recalled that waters in the Rouge River Watershed had been targeted by illegal trade in wild turtles. Swan Lake had attracted scores of criminals over the last two years who competed to profit from the finite resource. The response of law enforcement had been focused and productive.

Peters added that there are human-made solutions to human-made problems. The City of Markham has financed the treatment of phosphorous. He hopes that the oxygen levels will be restored by reducing the amount of chloride and constructing channels for the replenishment of the lake with fresh water.

Scarpitti recalled his life-long familiarity with the area that reached back to the former Mayor Tony Roman (1970 to 1984). In reply to Gail Arena who suggested using gravel rather than salt on roads, he explained the need to balance safety with existing technologies. In reply to Peter’s concerns, he indicated that Swan Lake Park could receive a natural heritage or “natural restoration area” designation, which would facilitate technical solutions.

Scarpitti thanked the community organization for its work and Peters acknowledged that their concerns had been well received by City Council.

Photo: Mayor Frank Scarpitti and councillors Joe Li, Andrew Keyes and Amanda Collucci met with members of Friends of Swan Lake to tour the lake, and discuss its past, present and future. Photo courtesy of Cindy Fowler.