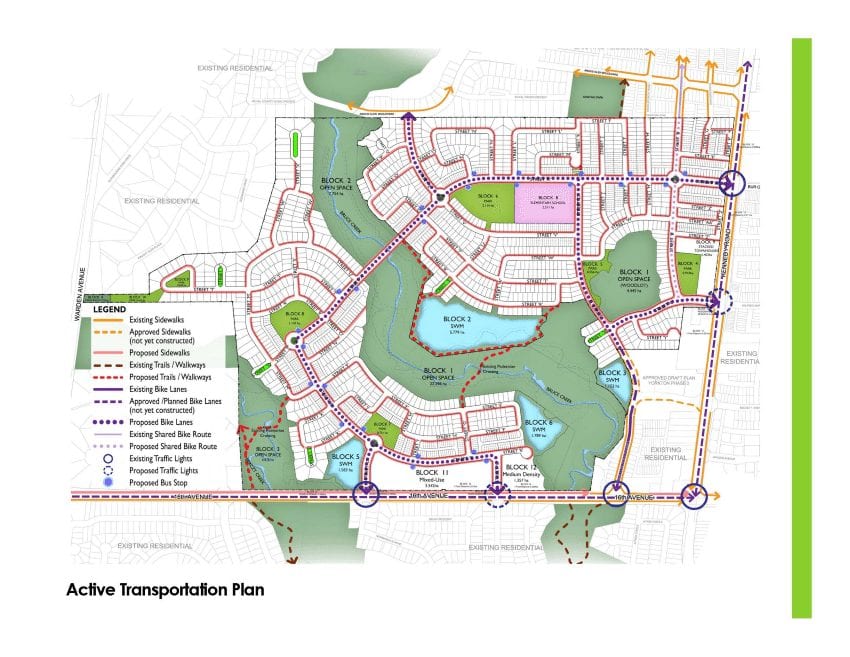 It’s been nearly two years since the York Downs Golf and Country Club was purchased for a large new development—and members of the public had an opportunity to raise questions last month.

On April 5, a public consultation was hosted at city council’s chambers, letting the developers and the community share visions, ideas, and address outstanding points of concern.

The project, spearheaded by Kylemore Communities, Minto Group and Metropia, involves the acquisition of York Downs’ 412 acres to develop 2,421 residential units—a mix of detached homes, townhouses and condos. Not only will the project add much-needed housing to Markham, but it will also open up natural features to the public that aren’t currently accessible.

The development will connect Toogood Pond trails south of 16th Ave. with existing city-managed trails west of Warden Ave. and Angus Glen Village to the north.

Currently, the space is only available to golfers.

Whenever development projects—particularly of this size—are proposed, concerns are always abound as to what will happen to existing communities and natural features.

Public input plays a key role not just for councillors, but also for Kylemore.

“The meeting went very well,” Kylemore Communities president Patrick O’Hanlon said. “There was a good representation of the community and it was nice to hear some of the concerns—and also hear from people that want to be involved in the project—want to live there, love the idea of how we’re connecting the valley system…. Overall people were there to understand what the application was and to give us their viewpoints on things that they felt could be done to make it better.”

O’Hanlon said the plans will keep in line with the existing Angus Glen design as well as maintain existing woodlots and valleys. The builders will also plant about 12,000 new trees.

“It’s only going to get better,” he said of the land. “Our offices are right here. They abut the land. Our homes are right on it. We live right on this border. So we are part of this community, and the last thing we want to do is upset our neighbours and our friends.”

The development is in line with an aggressive housing growth agenda the City of Markham is pursuing. With the population expected to increase by 150,000 from 2005 to 2031, York Downs alone can house 7,400 residents—all within city boundaries.

O’Hanlon told council that his team is open to changes to the master plan, calling it a “collaborative effort”. City staff will deliver a final report laying out recommendations, with a finalized plan going to council for approval.

The project has been a sizeable undertaking, but the popularity of the Angus Glen community has played a substantial role in moving the York Downs redevelopment forward.

“It was a very big endeavour for us. And our goal is really to complete the work that we’ve done in the Angus Glen community,” O’Hanlon said. “It’s really a treasure, and we are now able to bring that planning and bring everything we’ve learned through Angus Glen into this new community. We’re actually thrilled to be a builder of the York Downs community, and we will plan another treasure that the Kylemore brand is able to deliver.”