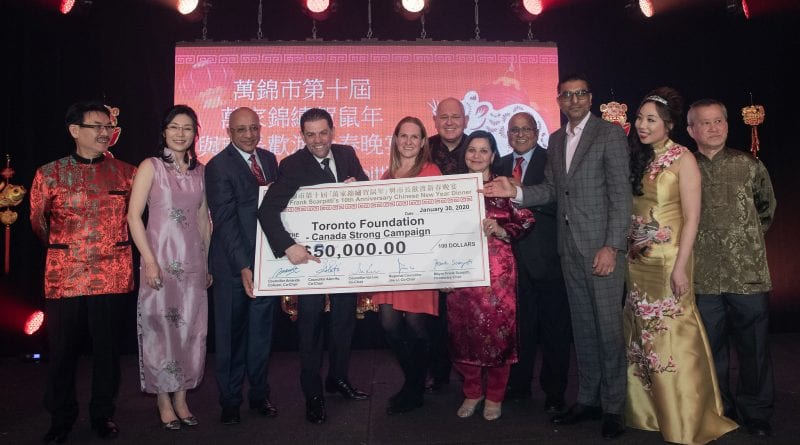 Mayor Scarpitti was all smiles at the annual Chinese New Year’s Dinner.

He had lots of reasons to be happy. The evening included great food and awesome entertainment.

But the highlight of the evening was when $180,000 was raised for the Canada Strong Campaign. Initially, there was a cheque presentation of $50,000 to Mohamad Fakih, President of Paramount Fine Foods and Founder of the Fakih Foundation, who launched the campaign to help the families of victims of Ukraine flight 752 which was hit by two missiles in Iran. CEOs from Flato Developments, Liberty Homes and Kylemore Homes along with Councillor Khalid Usman came forward during the evening to help increase the original $50,000 donation to $90,000. The federal government pledge to match the Canada Strong Campaign donations therefore brought the dinner’s total support to $180,000 for this campaign.

Donations of $10,000 each were also made to the Philippine Heritage Band, Yellow Brick House, Hakka Canadian Association, Federation of Chinese Canadians in Markham, and Joy Beyond Vision Community.

Photo: Councillor Khalid Usman and CEOs from Flato, Liberty and Kyelmore topped up the original $50,000 donation that Mayor Frank Scarpitti and dinner chairs Joe Li, Isa Lee,  Amanda Collucci and Alan Ho presented to Mohamad Fakih who launched the Canada Strong Campaign to help families of the victims of Flight 752.