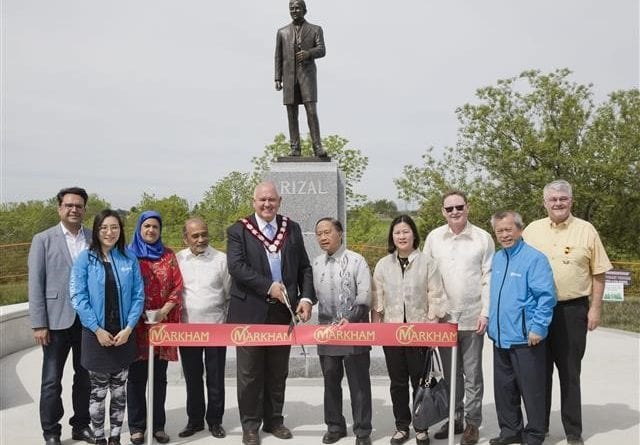 The Dr. José Rizal monument is the newest addition to Markham’s public art collection and, under the leadership of former Markham councillor Alex Chiu, was gifted to the City of Markham by the Filipino Canadian Community of Markham to celebrate Canada’s 150th birthday.

“Through his silent protest, Dr. Rizal galvanized and inspired generations of people,” says Markham Mayor Frank Scarpitti. “The monument honours a man who spent his life advocating the very values that define us as Canadians, multiculturalism and social cohesion. The Filipino-Canadian community’s generosity is appreciated and is a reflection of our community — welcoming and inclusive. We are united by our love for this country and love for Markham.”

Dr. José Rizal is a national hero of the Philippines and is widely regarded by his homeland as the greatest Filipino that ever lived. Dr. Rizal was a medical doctor, teacher, farmer, author, poet and political reformer, who envisioned a social order where democracy, freedom, equality, and universal brotherhood would be the norms.

According to Mogi Mogado, Markham artist and creator of the monument, this gift “will honour a man who spent his life advocating for ideas and principles that inspire generations of freedom fighters around the world. Dr. Rizal’s writings embody ideas that inspire and support multiculturalism in Canada, and harmonious living amidst diversity as exemplified today in our thriving Markham communities.”

The cold cast bronze monument of Dr. Rizal is six feet tall and is installed on a granite pedestal that is seven feet tall, with an estimated life span of more than 50 years. The site for this monument was chosen because of the close proximity to Rizal Avenue. The monument and surrounding Luneta Park is a significant addition to Markham’s beautification and public art portfolio.