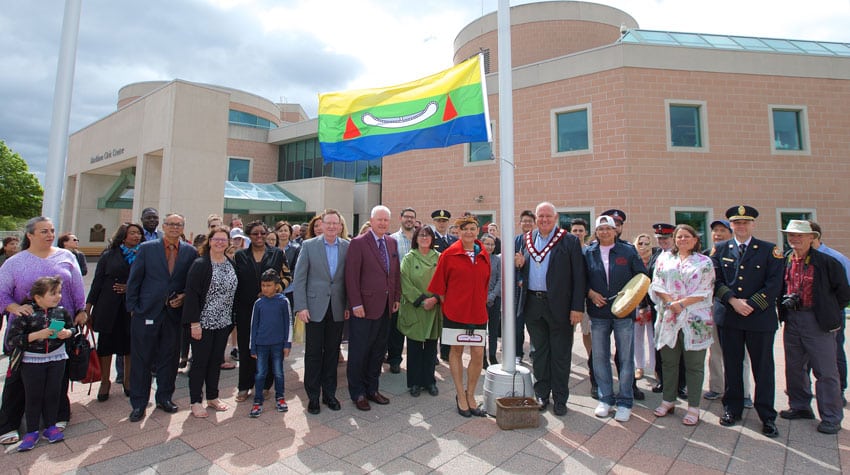 On June 4, Indigenous art educator, J’net Ayayqwayaksheelth, was joined by Sue Croweagle to lead the Markham Indigenous History Month celebration at the Civic Centre. A special observance was featured, including a friendship dance and ceremony of laying down the sacred medicine of tobacco.

“Celebrating the achievements of Canada’s Indigenous Peoples is an opportunity to listen to their stories, learn from their experiences and recognize the outstanding contributions of Indigenous communities,” said Markham Mayor Frank Scarpitti. “At the City of Markham, we believe in building and nurturing strong bonds with our Indigenous communities and I am proud, that together, we have been able to create those connections through mutual respect, trust and cooperation.”

National Indigenous History Month is recognized during the month of June, providing the opportunity for municipalities across Canada to join together and take action toward reconciliation. Markham supports the month-long observance through the city’s award-winning  Diversity Action Plan – Everyone Welcome.

“In recognizing the history of Indigenous Peoples, Markham is demonstrating our gratitude to be able to call Turtle Island home,” said Cheryl McConney-Wilson, city senior specialist: diversity, accessibility, wellness and recognition. “This is a wonderful opportunity to learn a more complete history of our country. Seeking out indigenous knowledge will help Canadians better understand and value all Indigenous Peoples and, hopefully, appreciate one another a bit more.”

“Today’s event is a powerful example of how the City of Markham is a role model for good relations with Indigenous communities,” added Ayayqwayaksheelth. “We made tobacco ties with city staff to set intention as a city to honour the Indigenous customs of reciprocity and reconciliation.”

Throughout the month, Markham will host several Indigenous film screenings in addition to an event on June 21 in honour of National Indigenous Peoples Day.
In 2017, the City of Markham signed a historic accord, an agreement of cultural collaboration with Eabametoong First Nation, also known as Fort Hope. The Ojibway community is located almost 360 kilometres north of Thunder Bay, which is about 1,000 kilometres north of Markham.

Through the first-of-its-kind agreement between an urban municipality and a remote, northern First Nation community, Markham and Eabametoong First Nation have agreed to promote social, cultural and economic collaboration, promote harmony and goodwill for the betterment of residents of both communities, and to increase public awareness.

Photo: J’net Ayayqwayaksheelth (in the red jacket, to the left of the mayor) and Sue Croweagle (to the right of the mayor) join Mayor Frank Scarpitti, members of council, Markham Fire and Emergency Services, city staff, York Regional Police and city residents to raise the Eabametoong First Nation flag at the Markham Civic Centre in honour of Indigenous History Month. City of Markham photo