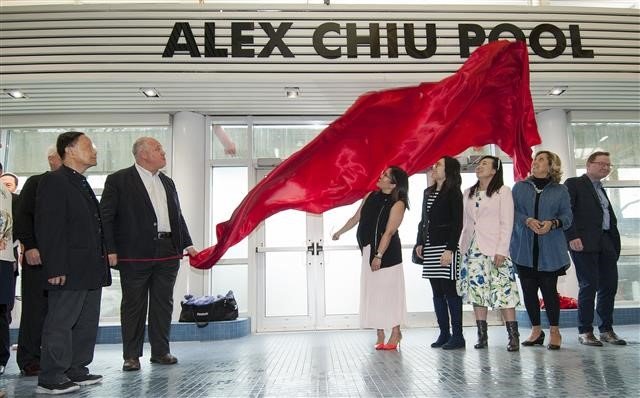 Residents enjoyed a free swim to celebrate Chiu’s outstanding public service and the lasting legacy that he has left in our community.

“I have always said that Alex is a man of few words, but big action,” says Mayor Frank Scarpitti. “He always gets things done. His love for this community is unwavering. He always went to bat for his constituents. He has dedicated his life to public service with the support of his wife, Alicia, and their family.

“I hope this pool will serve as a permanent reminder of all that Alex has achieved and all that he has contributed to the success of our community.”

In 1985, Alex Chiu made the decision to enter politics and won a seat as the councillor for Ward 8. He served as a Markham councillor for 33 years, playing an instrumental role in the city’s growth and development.

Throughout his tenure, he welcomed and supported many businesses in Markham and sat on several committees including his role as co-chair of the Canada Day committee, bringing the largest annual celebration to life year after year. He fundraised for various non-profit organizations, including York Region’s Police Community Safety Village, all three hospitals in York Region and Markham’s YMCA.

Chiu is a champion for diversity and strengthening Markham’s international partnerships, and was instrumental in forging friendship agreements with Huadu District, Foshan and Nanhai in China. In addition, he was an advocate for adults with disabilities, empowering youth, community youth and senior groups and ALS (Amyotrophic Lateral Sclerosis), a cause very close to his heart.

He championed the building of the Milliken Mills Community Centre & Library and was the first person to swim in the pool when the facility was completed in 1989.

In 2001, the former councillor committed to swimming 100 laps non-stop each day for five days at the Milliken Mills Community Centre & Library pool to raise money for the City of Markham’s United Way Campaign. He managed to raise nearly $20,000 and “Alex’s Swim” became an annual event in support of the United Way.

“I first entered politics after the coaxing of some good friends in the community,” says Chiu. “I stayed because I realized I had a real ability to help others and make change for the betterment of Ward 8 and the City of Markham. Having the pool at the Milliken Mills Community Centre & Library named in my honour is very humbling, and I am grateful for this distinct privilege.”