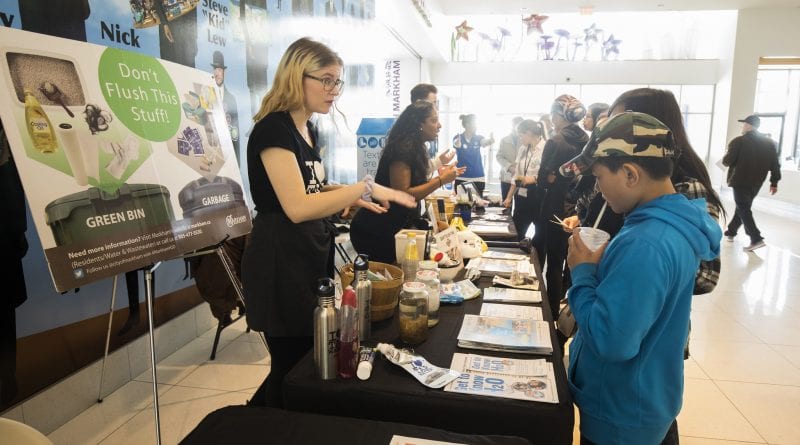 The City of Markham prides itself on being a leader in sustainability. Earth Day gives it an opportunity to prove just why that is.

Lyew is the environmental advisory committee’s past chair and part of the subcommittee spearheading Markham’s 11th annual Earth Day event this year. While Markham is acting on numerous environmental initiatives year-round, Lyew said a lot of people in the community aren’t necessarily aware of them.

Earth Day gives the City of Markham an opportunity to showcase these efforts that prioritize sustainability, while also encouraging Markhamites to learn about steps they can take in their own lives.

Though Earth Day itself is April 22, Markham’s official event will be April 27, from 10 a.m. to 4 p.m. at the Remington Centre at 169 Enterprise Boulevard in Markham.

“The main takeaway is to highlight what the City of Markham’s environmental and sustainable achievements and projects are,” said Lyew. “The event has always been to bring awareness to the community at large as to what the city is doing.”

Much of the focus in recent years has been on waste management efforts to bolster proper disposal of organics and recyclables. Lyew said these efforts will still be discussed at the event, but his team is shining a spotlight on this year’s official theme for Earth Day events around the world: species at risk. It isn’t often discussed in an urban context, but it’s a subject that’s relevant in Canadian cities, and especially Markham.

“It’s not always the biggest headliner, but it’s important,” he said. “A few years ago Markham was proudly proclaimed Canada’s first monarch (butterfly)-friendly city. We’re friendly for pollinators, butterflies and bees and such. On the wildlife end of things that’s one of the things we’re quite proud of. We’re always looking to build upon that.”

Other animals like raccoons and skunks may be seen as nuisances, but their health as species ties into the broader picture of how the environment is faring. Check out the Animal Advisory Committee or the Speaking of Wildlife booths at the event for more information.

The Markham Earth Day team has also involved a number of environmental and ecological clubs from York University, local elementary and high schools to bolster the outreach component of the event.

Attendees will be able to visit an array of booths connected to sustainability and environmental initiatives, presented by numerous local businesses and committees and departments from different levels of government.

While the final list is still being sort out, typically there are booths from Markham Public Library, Scales Nature Park and Pitch It Green, as well as the city’s animal care committee and waste management, to name a few.

Visitors can get their “environmental passport” stamped at the various booths, with the potential for prizes available to those who collect all of the stamps.

More information will be available at markham.ca closer to the event.