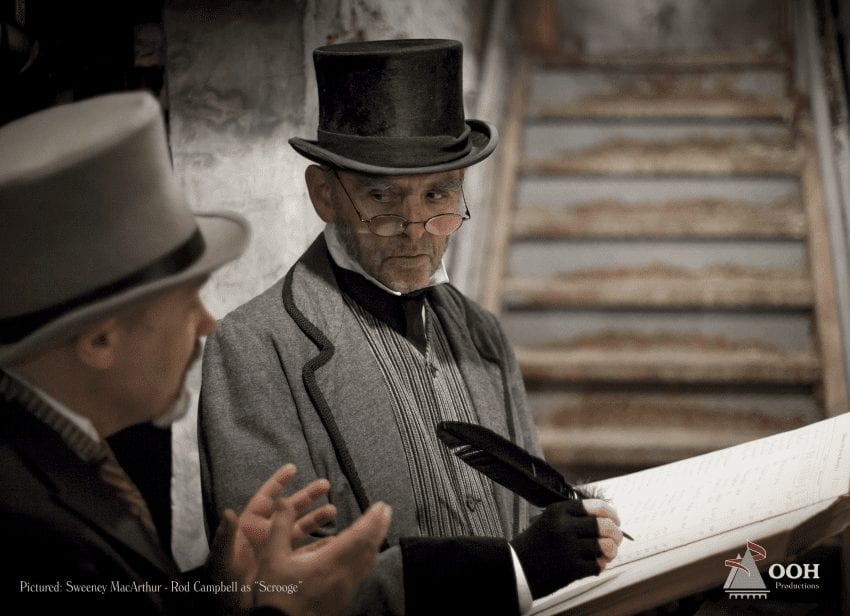 For many of us, Christmas just isn’t in full swing until the ghosts of Christmases past, present and future once again visit Ebenezer Scrooge.

This month at the Flato Markham Theatre, see this story come to life onstage. The Orillia Opera House’s production of A Christmas Carol plays on December 21 at 8 pm.

“My approach is to let the great storytelling do its work,” says Director Jesse Collins. “We approach Dickens’ masterpiece with a very traditional mindset, and the story sustains.”

Charles Dickens first wrote the story in 1843. Adaptations of the classic date back to dozens of theatrical versions from the 19th century, but the advent of technology has cemented this story in our culture. Now there are more than a dozen filmed versions. The Flintstones, Family Ties, WKRP in Cincinnati all the way to Boy Meets World and AquaTeen Hunger Force have all used this classic tale of redemption and Christmas to spread the joy of the holiday season.

“Each new production gets new life simply from the actors that interpret it,” says Collins. “We draw on our company to use any special talents they have to add a little spice. One of our cast members comes from the world of circus — don’t be surprised if you see the odd handstand or flip.”

This month’s production, while not traditionally a musical, has integrated musical performances of Christmas classics throughout the story under the music direction of Meredith Zwicker. She leads the band and the singers from onstage while also acting in the show.

“We’ve added traditional carols to many scenes in the play,” explains Collins. “Carolers abound and music is central to the party scenes as we take advantage of the wonderful musical talents of our cast to bring the music of the holidays alive.”

The show even concludes with a small Christmas concert. The talented cast indulges themselves a bit and asks the audience to join in a singalong right in Scrooge’s workhouse.

“It allows the audience to leave with a smile on their face and a song in their heart,” says Collins.

The cast that will hit the stage in Markham is led by veteran Canadian stage actor and Broadway veteran, Rod Campbell as Scrooge. Bob Cratchit will be portrayed by the classically trained Darren Keay, who’s been on regional stages across the country for years. All nine cast members are experienced professional actors from across the country – except one: nine-year-old Reid Dearing is making his professional debut as Tiny Tim.

“Markham should be prepared to see a ghost story with the happiest of endings,” promises the director. “It’s full of laughter and music and a resounding message that there is good in us all, and that we just need to open ourselves to it.”