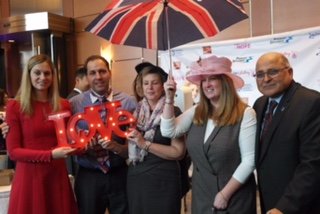 The 28th annual CIBC Celebration of Hope hosted by Markham Stouffville Hospital took place on Oct. 30, 2016 at the Hilton Hotel.  The event succeeded once again in bringing awareness and educating people about cancer and the work done by the hospital.

It was an afternoon filled with entertainment, shopping, raffles and more.  The event kicked off with a performance by WANNABE- The Spice Girls Tribute Band, leading to a runway fashion show featuring designs by Ted Baker along with other well-respected designers.

A highlight of the afternoon was the tribute made to Dr. Crystal Pallister, General Surgeon at Markham Stouffville Hospital.  She has been said to have a huge impact on breast cancer patients’ lives, making her deserving of the recognition.  “What has touched me the most is when you meet people that are survivors that you’ve helped through the years, and seeing them have children and even grandchildren,” Pallister explains as she stands on stage alongside Davis and Bell.

Frank Scarpitti, mayor of the city of Markham, as well as Justin Altmann, mayor of Witchurch-Stouffville attended the luncheon showing support towards the hospital.  “It’s really a pleasure to be here with all of you this afternoon at another amazing Celebration of Hope luncheon,” Scarpitti mentions, showing appreciation for his availability to attend.

The star of the event was the chance to win a 2016 Mini Cooper Convertible.  This prize was long awaited throughout the event, and it was described in a catchy way to, “help ‘beep’ cancer”.

MP Jane Philpott also attended the event in support of the hospital.  “I want to congratulate all of you for being here, for having the vision to make this event the great event that it is every single year, for realizing the power of what happens when we get together,” Philpott stated while she on stage giving her speech of appreciation.

CIBC sponsored yet another successful Celebration of Hope luncheon with a great turnout of supporters, raising large donations that will go towards benefiting the Markham Stouffville Hospital in the future.