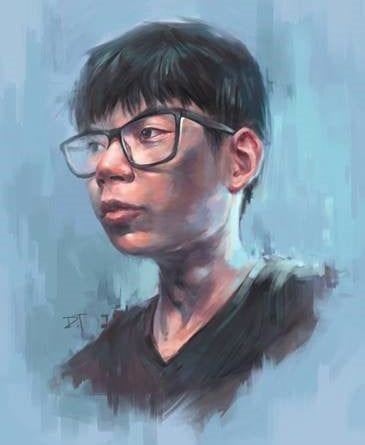 A student who is using his artistic skills to serve the greater community – especially ecological and volunteer initiatives – is among this year’s Celebrating Student Success stories.

Dylan Tan arrived at Milliken Mills High School in Unionville in Grade 10 as a pencil and digital portrait artist. Since then, he has customized illustrative and photographic work in keeping with the school’s signature wellness and mental health events and publications.

Described by his nominator as an “ethical leader,” Dylan was a key member of the school’s Artonomy team at an indigenous education and equity conference hosted by the York Region District School Board (YRDSB) last year. Dylan also created a series of pen illustrations of plants and wildlife in the school’s arboretum for a school field guide. Thanks to his designs, the yearbook supports the school’s ecological focus for the first time.

“Recognizing the many wonderful and varied accomplishments of YRDSB students is important to our board and to all of us who value student success in our school communities,” said Juanita Nathan, Chair of the Board. Director of Education Louise Sirisko agrees. “They demonstrate leadership and qualities that all of us admire. Their accomplishments reflect persistence and hard work. They have achieved so much and we wish them continued success with the support of our devoted staff and our partnership with our families.”

William Yan Xu, also of Milliken Mills H.S., is an international student who has been studying in Canada since September 2017. He helped create a student-led Equity and Inclusivity Committee and drafted a new constitution for the school’s student activity council to ensure equity and inclusivity is embedded in its practices and policies. He’s also a “tireless advocate” and supporter of fellow international students.

Kelvin Nguyen of Greensborough Public School is an active member of student council, serving last year as parliamentary secretary and this year as prime minister. He was instrumental in making the school’s Well-Being Week (Greensborough Grows) a success last year.

Meilun Yu of Stonebridge Public School is described by her nominator as “passionate about supporting students of all identities in her school” and played a key role in establishing its first Gay Straight Alliance. A strong supporter of improving student mental health at Stonebridge, she has worked with student government to educate intermediate students about improving their well-being.

As a member of the Regional Student Equity Committee, Meilun delivered a keynote speech at the 2019 United Voices Conference and facilitated discussions with students to identify barriers and solutions to equity in schools.

Janice Baek of Thornhill Secondary School’s advanced placement program has earned numerous academic awards, including the coveted Thornhill Citizenship Award for exemplary citizenship and leadership success. An accomplished business student, she placed in the 10 at the provincial DECA business club competition. She serves as Minister of Skill Development on the York Region Presidents’ Council.

Melina Ghasem-Asad, also of Thornhill S.S., has taken on numerous leadership roles, including Student Council Publicity Director and Student Council Student Issues Director. She’s an executive member of a mentorship program that helps Grade 9 students make the transition to high school, a member of the school’s DECA business club, and founder and president of the school’s chapter of Best Buddies Canada, which brings together students with and without an intellectual and/or developmental delay in the hope they will develop a lasting friendship.

Self-portrait of Dylan Tan and other photos courtesy of the York Region District School Board.