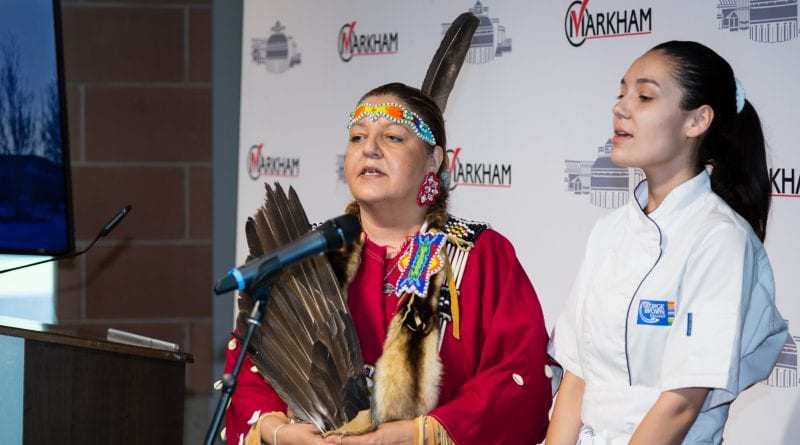 The City of Markham kicked off National Indigenous History Month with a celebration that included a strawberry ceremony.

In Indigenous traditions, strawberries are often referred to as ‘heart berries’ and serve as a reminder to Indigenous peoples of reconciliation and the importance of maintaining heartfelt relationships in their families and communities.

In a strawberry ceremony, each participant is given a strawberry and a small cup of water. A prayer is typically spoken before the water and strawberry are consumed in memory of missing and murdered Indigenous women and girls.

“We share this land and we are grateful to all who have come before us,” says Mayor Frank Scarpitti. “As a country, we have an opportunity to reframe history and honour the experiences of Canada’s Indigenous Peoples, while celebrating their heritage and outstanding achievements.”

In 2017, Markham signed an accord with Eabametoong First Nation, also known as Fort Hope. A first-of-its-kind between a Canadian urban municipality and a remote northern First Nation community, the partnership provides an opportunity for the two communities to collaborate culturally, socially and to learn from one another.

National Indigenous History Month marks its 10th anniversary this year. It was established to honour the history, heritage and diversity of Indigenous peoples in Canada and to recognize the strength of present-day Indigenous communities.

UNESCO declared 2019 as International Year of Indigenous Languages to raise awareness of the crucial role languages play in people’s daily lives. According to the 2016 Census, the number of people in Canada who were able to speak an Indigenous language increased by eight per cent from 1996 to 2016.