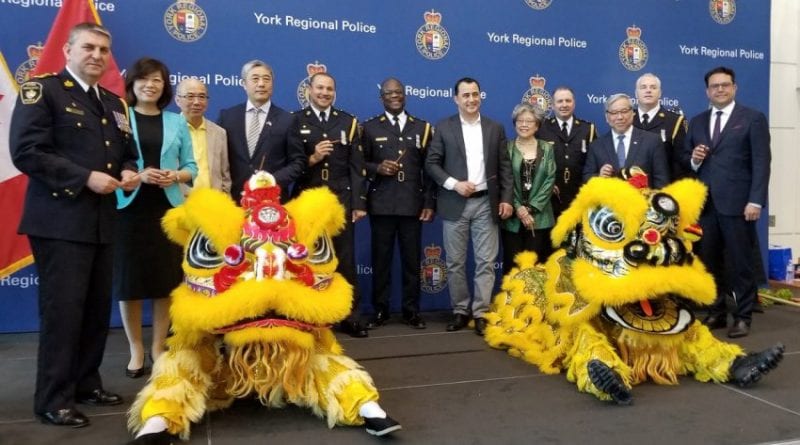 YRP also recognized Const. Khorrami and Chinese Business Association Annie Ho for their “outstanding work” with the Asian community at the event, held at its headquarters in Aurora on Saturday, May 25. Markham Mayor Frank Scarpitti entertained the crowd with a famous Chinese melody.

In 2002, the federal government signed an official declaration to designate May as Asian Heritage Month, which has been celebrated across the country since the 1990s. The theme of this year’s campaign is Asian Canadian Youth: Shaping Canada’s Future.

Numerous events helped shape Asian Canadian history. Between 1881 and 1884, for example, more than 17,000 Chinese came to Canada to build the Canadian Pacific Railway and later to maintain it. B.C. already had a sizeable Chinese population and racism towards the Chinese was widespread. Through the Chinese Immigration Act of 1885, a $50 head tax was imposed on every Chinese person seeking entry into Canada, marking a period of legislative anti-Chinese racism. The head tax was raised to $100 in 1900 and $500 in 1903.

Despite the head tax, Chinese immigrants continued to come to Canada. In 1923, the federal government passed the Chinese Immigration Act, which virtually restricted all Chinese immigration to Canada. It was repealed in 1947. In 2006, the federal government apologized in the House of Commons to head-tax payers, their families and the Chinese Canadian community. Learn more at www.canada.ca/en/canadian-heritage/campaigns/asian-heritage-month.html.