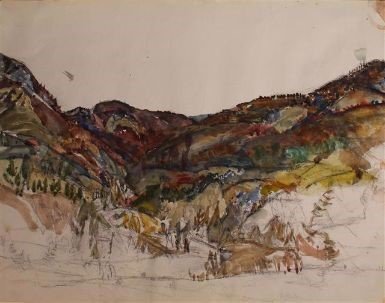 The Art Gallery of Ontario (AGO) has transferred 474 works by Frederick Horsman Varley (F. H. Varley) to his namesake gallery – a gift that will help commemorate the 100th anniversary of The Group of Seven.

“The Varley Art Gallery of Markham staff are thrilled to receive this transfer,” says Director Niamh O’Laoghaire. “Being present when the 11 boxes of material arrived from the AGO, watching them being opened and objects be individually unwrapped has to be one of the more exciting moments I’ve experienced in my six years here at the Gallery.”

The works are primarily on paper, sketches and drawings, and include watercolour and oil sketches, as well as several sketchbooks. Most are rapid observational sketches executed on the street while people watching or while in nature. Some of the works are detailed, while others are minimally rendered. Together, they speak to Varley’s sketching practice over time, and will contribute to a better understanding of his artistic development and career, the Gallery reports. 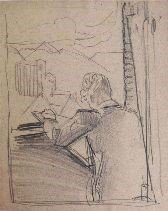 Born in England in 1881, Varley served in the First World War as an artist. He immigrated to Canada in 1912 and was a founding member of The Group of Seven. One of his most famous works is Stormy Weather, Georgian Bay (1921), painted after a summer at Georgian Bay, yet he was primarily a figure and portrait painter. He died in Toronto in 1969 and was buried alongside other members of the Original Seven at the McMichael Canadian Art Collection grounds in Kleinburg.

“Understanding the range and possibilities of these additions is going to take time,” says Curator Anik Glaude. “We have a lot of work to do in the short and mid-term around assessing the works’ condition, understanding their storage needs, arranging conservation where required, documenting them, overseeing matting and framing and readying them for display. We anticipate that we will be able to begin displaying them next summer. That will be an exciting day!”

The transfer almost doubles the permanent collection at the Gallery, which opened its doors on Main Street Unionville in 1997. The AGO received Varley’s works in a series of seven gifts made by Kathleen Gormley McKay between 1971 to 1994. “We are pleased to see these works now put in service of her ambitions, under the thoughtful care of the Varley Art Gallery of Markham,” says Georgiana Uhlyarik, Fredrik S. Eaton Curator of Canadian Art at the AGO.

“I would like to thank the AGO for recognizing the importance of displaying his artwork in Unionville so residents and visitors alike can enjoy the significance of this legendary Canadian artist,” Mayor Frank Scarpitti says. “These new works will undoubtedly increase the Gallery’s ability to celebrate Markham and our thriving community.” The Varley Art Gallery is closed due to grey-lockdown zone COVID-19 restrictions. Watch its social media pages or visit markham.ca/culture for updates regarding its reopening in 2021.

Top photo of ‘Foothills near Invermere, B.C.’ and inset photo of ‘Artist Sketching at Window’ courtesy of the Varley Art Gallery of Markham.