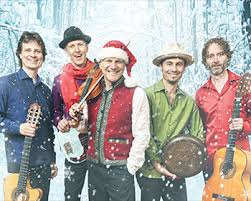 The Sultans of String are celebrating the season with a musical trip around the world at the Flato Markham Theatre on Dec. 13.

From fiery fiddle tunes to a Caribbean sleigh ride, the holiday fiesta heats up when Sultans of String bring their signature sound to well-known gems such as Jesu, Joy of Man’s Desiring, Jesous Ahatonhia (with newly-translated Indigenous lyrics), a Turkish twist on Greensleeves, Silent Night, as well as a Gypsy-jazz inspired Django Christmas.

For 10 years, Sultans of String have topped the Canadian radio charts and received multiple awards and accolades. Bandleader and violinist Chris McKhool was recently awarded a Queen’s Diamond Jubilee Medal for his work in creating community through music.

Sultans of String have been crisscrossing North America for the last several years and they’re equally at home in concert, a folk or jazz club and a festival setting.