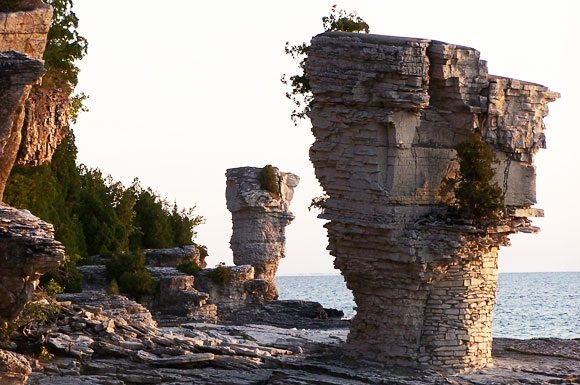 Exploring Canada this year is as easy as a walk in the park.

For Markhamites wishing to take in Canada’s natural splendour, there are several such locales as near as three hours away.

From Point Pelee National Park in southwestern Ontario to Thousand Islands National Park near Kingston to the Bruce Peninsula and Georgian Bay Islands parks north of Toronto, lots of options are abound whether you’re in the mood for hiking, camping, water sports or nature watching.

For those in the city, it’s hard to imagine the vastness and geographic diversity of these parks—which is precisely why Canadians should hop in the car to visit, according to a Parks Canada spokesperson and parkland enthusiast.

“The 150th anniversary of Confederation marks an important milestone and provides a unique opportunity to strengthen our sense of what it means to be Canadian,” said Leslie MacPherson, public relations and communications officer for Parks Canada’s Georgian Bay and Ontario East Field Unit. “National parks, national historic sites and national marine conservation areas represent the very best that Canada has to offer and tell stories of who we are.”

These are the nearest national parks to Markham, with some key details about how to maximize your road trips there.

Only accessible by ferry from Honey Harbour, this park of 63 islands is just an hour and 40 minutes north on the 400. The park is popular for campers, swimmers, and even daytrippers looking for a scenic picnic destination on Beausoleil Island.

On the other side of the Georgian Bay, just south of Tobermory, lies Bruce Peninsula National Park, a 156-square kilometre tract of forest popular with hikers and campers alike. Whether you want to walk the Bruce Trail (different sections appeal to people of varying degrees of experience), swim in the famous grotto, or look out for black bears and rattlesnakes on the cliffs, this park has something for everyone.

Also on site, at the northern part of the park, is the Fathom Five National Marine Conservation Area—one of only four in Canada—showcasing the sparkling waters of Lake Huron, 22 shipwreck dive sites, and rare orchid species for nature-watchers and photographers alike.

As the name would suggest, this collection of islands is a nature-lover’s paradise. Great for exploration by kayak, canoe or powerboat, the park’s hiking trails will also expose visitors to rare species of turtles, birds and other hallmarks of “historic wilderness”—all just three hours from Markham, past Kingston.

For those without the time to travel afar, there’s no reason to venture outside York Region to experience a national park space. The region is home to Canada’s only “urban park”—the Rouge National Urban Park, home to beaches, Carolinian forests, camping and hiking.

The main visitor areas in Markham are the Bob Hunter Memorial Park along 14th Ave. and Reesor Rd., as well as the Reesor Welcome Centre at Reesor and Elgin Mills roads.

The appeal of the Rouge National Urban Park lies in its preservation of green space—and thousands of species of plants and animals—from Markham to Pickering in a rapidly growing part of the province. Land is still being assembled, but when complete, officials say the park will be 79.1 squared kilometers—23 times as big as Central Park in New York City.

“The Rouge protects nature, culture and–for the first time in a Canadian federal park–agriculture, in an integrated way,” said Jeffrey Sinibaldi, the park’s spokesperson. “The national urban park also aims to become Canada’s premiere ‘Learn To’ park, as well as a gateway to other Parks Canada sites across the country.”

Sinibaldi added the park is within a one hour drive of one-fifth of the country’s population and accessible by public transit, making it a more attainable visit than several of the parks further removed from major popular centres.

But with several close enough to explore on a day trip, Markhamites are well-suited to acquaint themselves with the country’s nature.

“People in Markham are fortunate to have so many natural treasures close by to explore,” said MacPherson. “Parks Canada is the country’s largest tourism provider and we are committed to providing visitors with exceptional and meaningful experiences at our places.”

For more information about access to these parks, visit www.pc.gc.ca.