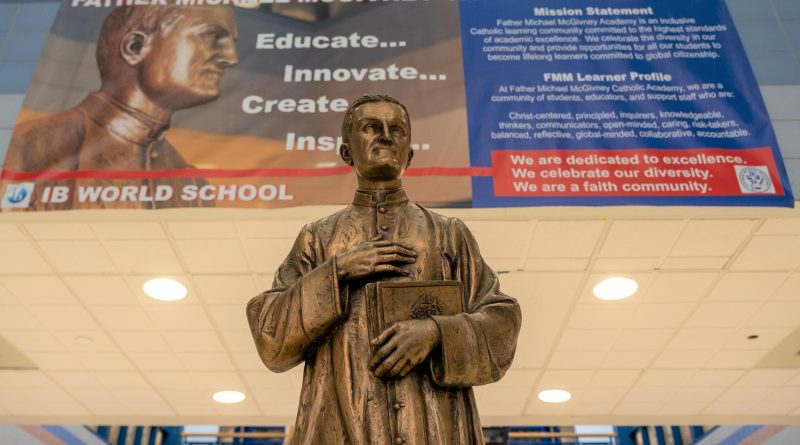 Staff and students at Father Michael McGivney Catholic Academy in Markham held a community food drive for a local parish in honour of their patron, who was “blessed” during a recent beatification ceremony.

McGivney, now one step closer to sainthood, ministered to a largely Irish-American and immigrant community. He established the Knights of Columbus in 1882 to provide financial support for widows and orphans and to keep Catholic men and their families close to their faith at a time of anti-Catholic sentiment.

He died of pneumonia in 1890 at age 38 after falling ill during the Russian flu pandemic. The Knights of Columbus went on to become one of the world’s leading fraternal and service organizations, with two million members in more than 16,000 parish-based councils in countries that include Canada, the U.S., Mexico and the Philippines.

Beatification is a recognition accorded by the Catholic Church of a deceased person’s entrance into heaven and capacity to intercede on behalf of individuals who pray in his or her name. The person is given the title “Blessed” before their name.

In the week before McGivney was beatified during a special mass at the Cathedral of St. Joseph in Hartford, Connecticut on October 31, students and staff at Father Michael McGivney C.A. – which was founded in 1992 – held daily prayers, a community food drive for the Good Shepherd Roman Catholic Parish, virtual live rosaries and more.

“So much of what we do at Father Michael McGivney C.A. is motivated by Blessed Michael McGivney’s life of prayer, service and concern for the most vulnerable,” Principal Joel Chiutsi says. “If each of us lived our lives as he did, the benevolent effect on our school and the world would be unimaginable.”