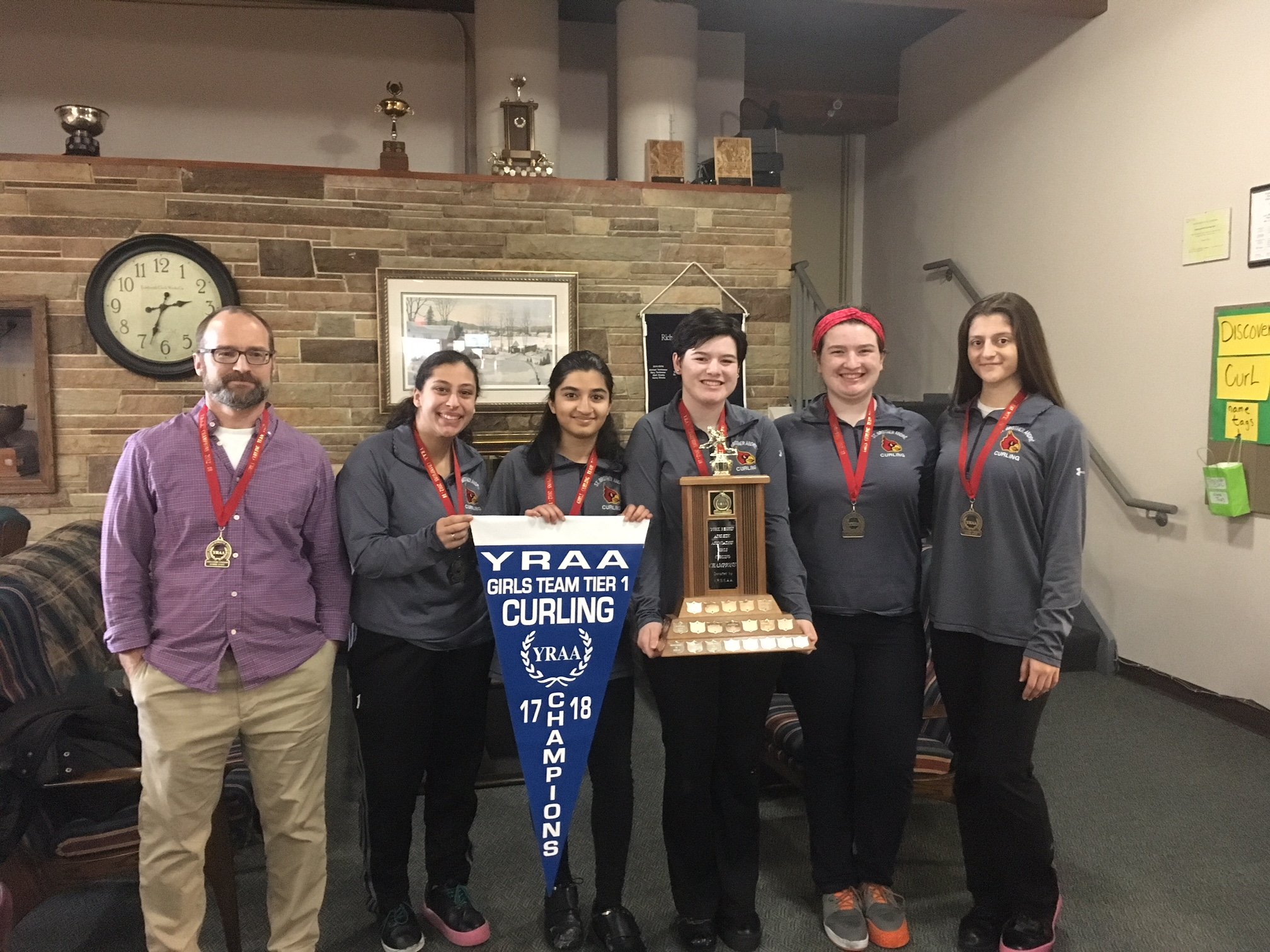 It took five tries for Sarah Wallace, but she finally got it. As skip for the St. Brother Andre Cardinals Tier 1 girls curling squad, she was determined to win a York Region Athletic Association (YRAA) championship.

This season, it came to fruition at last.

“It feels really good, because I’ve never won a YRAA,” Wallace said. “It’s the fifth one I’ve been in, but the first one I’ve won and to do it with my team feels fantastic.”

Wallace and her rink, consisting of her sister Claire, second Ayesha Basu and co-leads Melissa Lamanna and Jessica Issa, took the banner home from the Richmond Hill Curling Club after defeating the St. Maximilian Kolbe Mustangs 6-2 in six ends.

“We were all nervous, but we knew we could do it if we all played our best,” Wallace said. “We all just pumped each other up, gave each other high-fives before going on, and just played the game.”

St. Brother Andre hadn’t lost a game all season, which included a victory over the Mustangs just two days prior in the page playoff. But with the intensity of a final at hand, Wallace tried her best to keep everyone’s spirits strong, fist-bumping her teammates whenever she came down to throw a rock.

“I would tell them the shots down there,” Wallace said. “We wanted to keep the positivity up so that none of us would feel down, especially if anyone missed, so it was just to keep it going.”

While Wallace, who plays competitively out of the Unionville Curling Club, is quite experienced, some of her teammates were far more green.

To get them up to speed for the season, Wallace brought Issa and Lamanna out on the weekends to practice.

“We would come out on Sundays and teach them how to play as best as we can,” Wallace said. “So we’d show them the basics. Jessica used a stabilizer and Melissa used the broom. We’d show them what to do and then put them in a game situation after so they could practice it, and so that they could understand the feel and competitiveness of it.”

It paid off, as the leads started off each end by putting rocks in play.

At the back half, Wallace showed her ability, executing a difficult takeout with the opening end’s last rock to leave St. Brother Andre lying three.

“Honestly, I knew I had to do a straight runback so I had to hit it right on the nose,” Wallace said. “I just tried to calm myself down. I’ve done this in practice before, so I just need to get out there and just throw it.”

That big start, followed by a steal of one in the second end, put St. Brother Andre firmly in the driver’s seat and calmed the nerves.

“It kind of settled them, because after I had made the really hard shot, I can go on and make the easy draws and call the game properly,” Wallace said. “It felt really good to make that shot.”

The next time St. Brother Andre had last rock was in the fifth end, where a single gave it a 6-1 advantage and allowed the Cardinals to seriously think about the championship.

“When we got that point, because I knew if we got one (in the sixth end) or just held them to one, we would shake (and they would concede),” Wallace said. “I played it more clean and more open to force them to get (just) one and try to make them make some shots.”

Sure enough, St. Maximilian Kolbe could only draw for one in the sixth end and called it a day immediately after, giving the title – at long last – to Wallace and the Cardinals.

“It feels really special,” Wallace said. “It’s one of my first times winning for the school and I feel really proud that St. Brother Andre gets the opportunity to have another banner in the gym.

“It kind of leaves my mark and leaves a legacy here, so that’s really good.”