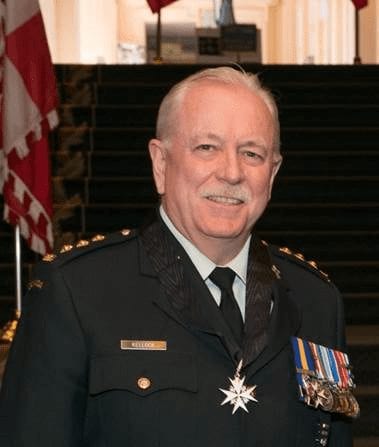 Captain Stewart Kellock, with more than thirty-five years in the Canadian Armed Forces, currently serves with the military police as an advisor to National Defence Headquarters at Ottawa and as a professor for National Security Program at Durham College. During his career, he has been a platoon commander at Afghanistan and chief of investigations for the United Nations at Kosovo.

“You have the watches, we have the time,” he recalls saying. Nevertheless, he built trust, step-by-step, to find cooperative witnesses at Kosovo. He is proud of having achieved the first conviction for terrorism at the International Court of Justice, the principal judicial organ of the United Nations.

Above all, Kellock considers his experience of repatriating fallen soldiers, directly from the Afghan battlefield to interment from 2004 to 2008, a highlight of his service. He’s travelled the Highway of Heroes more than fifty times. One time, Montreal-area Van Doos regiment members escorted four or five of their deceased soldiers. After witnessing thousands of people lining the highway, one turned to him and said, “I used to be a Quebec sovereigntist, now I’m a Canadian nationalist.”

Kellock has always been service-oriented to the country and public good. He describes his Canadian Forces service as a privilege and honour. And, something that makes him both humbled and proud.