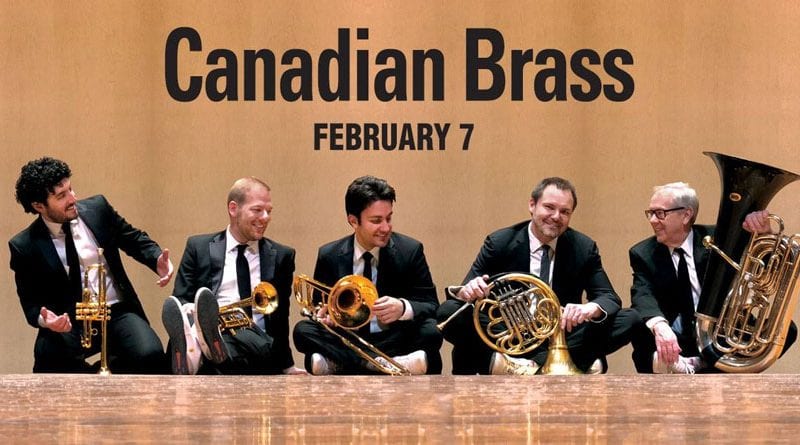 With an international reputation as one of the most popular brass ensembles today, Canadian Brass has truly earned the distinction of the world’s most famous brass group.

Friends Chuck Daellenbach and Gene Watts first came together in 1970 to form a brass quintet, a chamber music setting not entirely new, but never before having garnered the success and storied career Canadian Brass would achieve over the next 40 years.

As masters of concert presentations, Canadian Brass has developed an engaging stage presence and rapport with audiences. Each of their concerts shows the full range from trademark Baroque and Dixieland tunes to new compositions and arrangements created especially for them – from formal classical presentation to music served up with lively dialogue and theatrical effects. The hallmark of any Canadian Brass performance is entertainment, spontaneity, virtuosity and, most of all, fun but never at the expense of the music. Whatever the style, the music is central and performed with utmost dedication, skill and excellence.

With a discography of more than 130 albums and an extensive worldwide touring schedule, Canadian Brass is an important pioneer in bringing brass music to mass audiences everywhere. They have sold well over two million albums worldwide.

Touring legends with an enthusiastic fan base, the Canadian Brass play to packed houses everywhere throughout the USA, Canada, Japan and Europe. They have also toured Australia, the Middle East, the Soviet Union and South America.