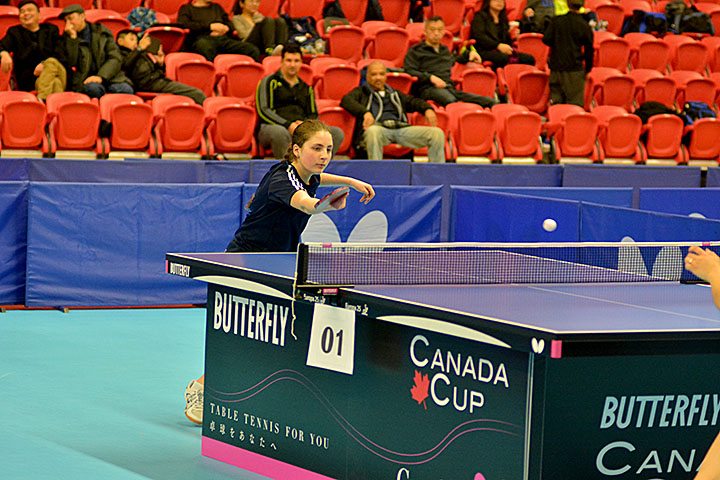 The plastic balls will be flying in March as some of the top table tennis players in Canada descend on the Markham Pan Am Centre for the 2018 Butterfly Canada Cup Finals—one of the top tournaments in the country for the growing sport. When the tournament convenes March 10 and 11, as many as 80 players from five or six provinces will be competing for points vital for those hoping to make the national team.

The Canada Cup is a top-tier tournament, second only to the Canadian Championships, slated for July.

All competitors have garnered enough points in prior events to prove they are contenders, but only the top earners throughout the year will carry the honour of representing Canada internationally at events like the Pan Am Games and summer Olympics. Table Tennis Canada Chief Executive Officer Tony Kiesenhofer said the Butterfly Canada Cup is important for coaches to be able to see not only the national pool of talent, but also up-and-coming players with potential for the future.

“There is no one there who doesn’t belong,” he said of the Butterfly Canada Cup players—many of whom hail from Markham and the GTA.

That makes hosting the event at Markham, in a venue built ahead of the 2015 Pan Am Games, such an easy decision, Kiesenhofer said, adding that the centre was in the national spotlight last October as home to the International Table Tennis Federation Women’s World Cup.

“Selecting the national team for us is a process,” he said. “It’s not just one tournament, but this is a major tournament to earn points. You have a good indication by the different results in the different areas who the best players are in Canada.”

Two players on each team of three to four are generally selected by points from qualifying tournaments while the remainder are chosen based on coach discretion, in particular when it comes to skills and chemistry needed for doubles’ events. It’s especially important for 2020, when mixed doubles will be added to the roster of Olympic events.

The selection process is an ever-evolving one, too. The national team is formally solidified about two months before each major international event. But with so many events, that means a constant evaluation of who is best to make up teams. The team for the Commonwealth Games, scheduled for April in Australia, was selected just before Christmas. One month later is the World Championship in Sweden. Table Tennis Canada also has to consider the annual World Cup, the 2020 Tokyo Olympics, the bi-annual Pan Am Games, Pan American Championship, Pan American Cup and domestic tournaments.

“It’s a full program each year,” Kiesenhofer said. “Development players, especially, need to pay attention to use these tournaments to gain experience, move up in the world rankings and earn their spots in different competitions.”

Although it may be an exclusive group playing, organizers are hoping Markham’s booming recreational table tennis community will come out for moral support. Team Canada is always looking ahead to who the next generation of players will be to carry the national team in the 2024 Olympics.