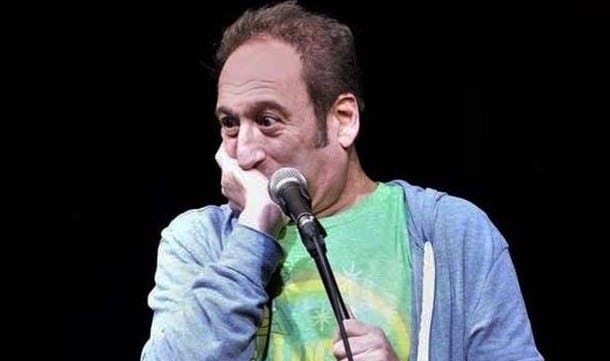 Comedian Jeremy Hotz is many things but happy isn’t one of them. The popular Canadian stand-up comic known for his sardonic style of observational humour is bringing his Miserable Mini Theatre Tour to the Flato Markham Theatre on Oct. 27.

For the comic who bills himself as the Officially Miserable Jeremy Hotz, we had to ask the obvious question. Why so miserable?

“I dunno, have you seen the news?” Hotz said with a laugh. “I think that the world was a very good idea, but it’s just not practical anymore. No one seems to be caring about anyone.”

All the more reason for people to take comfort in comedy, which Hotz laments is increasingly threatened by the trend of people getting offended by, well, everything.

“To people who just stop at certain themes and go, ‘That’s not funny!’ without listening to the joke, come on,” he said. “You’re killing an art form. What are you doing?”

So how does Hotz, who’s been performing for more than three decades, cope? Mostly by ignoring it.

Hotz said he won’t work on material worrying—or even wondering—if someone might find something too offensive or if a joke could garner headlines for all the wrong reasons. He focuses on what he says comedy is supposed to be about—whether something is funny or not and whether he can do the joke justice. So far, it’s been working.

“Every time you go on stage, someone has an issue with you no matter how well you’ve done,” he said. “If it’s funny, it’s in my act. It’s a stand up comic’s (show). Things are going to be said. What are you expecting? It’s in a venue that is advertised for this person to do stuff. And then you show up and get offended? It’s wrong. Get up and leave if you don’t like it, if it’s against your principles that you’ve invented two seconds before you walked into the club.”

Instead of getting caught up in the outrage, he focuses on his craft. Unlike many comics who meticulously work through potential material with pen and paper, Hotz opts to let the energy and tone of the room drive content in a more improvisational way.

Tickets for Hotz’s show range from $59 to $69, with youth tickets available for $15. It’s one you don’t want to miss, the comic promises.

“Come see the show,” Hotz said. “Markham, you’ve got to come see me, because I’ve driven through Markham and this may be the only time I stop.”