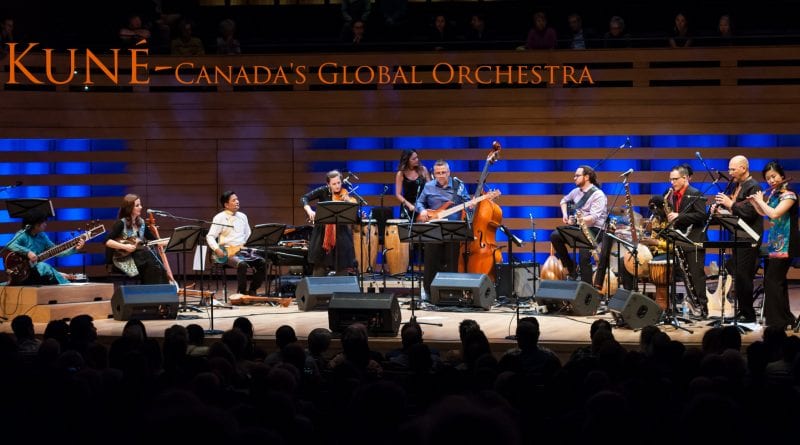 As a country that prides itself on both diversity and culture, Canada is faced with a growing concern that stems from this great strength. How can the many backgrounds that make up our people be expressed in a combined cultural expression? Is there even a Canadian culture?

Enter Kuné: Canada’s Global Orchestra, a 13-piece ensemble of world-class musicians born around the world and one who is Métis, all of whom call Canada home. The brainchild of Mervon Mehta, performing arts executive director at The Royal Conservatory of Music, the intent behind was to make music that represents Canada’s mass culture right now.

“I think it’s very important to present projects like Kuné to our community,” says Flato Markham Theatre GM,  Eric Lariviere. “Markham is the most diverse city in Canada. To associate a project like this with Markham is both fitting and exciting.”

The concert in Markham on Feb. 8 is one of their first, since creating music together for the first time.

“My gig is to try to coordinate the whole thing,” says group artistic director, David Buchbinder. “So that the band has a sound.”

After auditioning 150 musicians in Toronto, the chosen group met for the first time in 2017. Part of what makes the group special is that their music, largely, wasn’t composed in advance. It was created through a series of meetings, workshops and rehearsals.

Their first meeting was at a farm in the middle of the following winter. The group met, spoke, ate and even chanted together before creating a note of music. Buchbinder’s idea was to create a traditionally Canadian bonding experience for the group. From there, the ensemble reconvened at the Conservatory’s Toronto rehearsal studio. After much rehearsing and writing, the group moved to the recording studio and found itself recording a truly unique record. The result was their eponymous debut, released last spring with Universal Music Canada.

“It’s always a bit of a fool’s game to claim that you’re doing something in music that nobody’s ever done before,” says Buchbinder. “But, this is pretty rare.”

The group has since built a repertoire that includes creations that tip from drones to catchy melodies and deep grooves to danceable rhythms.

We Met In Tkaranto, also the lead-off track on the album, is led mostly by fiddle but transforms into something more mystic once the sitar takes the lead half way through. The Arabic-Latin influenced Espera, Esperanto (Wait, Esperanto) has a noticeable urgency that features varying tempos that give way to an almost jazz style of playing.

They’ve even worked up the Oscar Peterson tune, Hymn to Freedom as a sort of anthem to coming together.

“This is just what we need right now,” says Mehta. “We need to show people that, yes, we can work together. It’s actually the perfect message.”

“The show will bring an incredible range of sounds and musical colours,” says Lariviere. “We invite lovers of, really any kind of, music to join us and experience something very unique.”