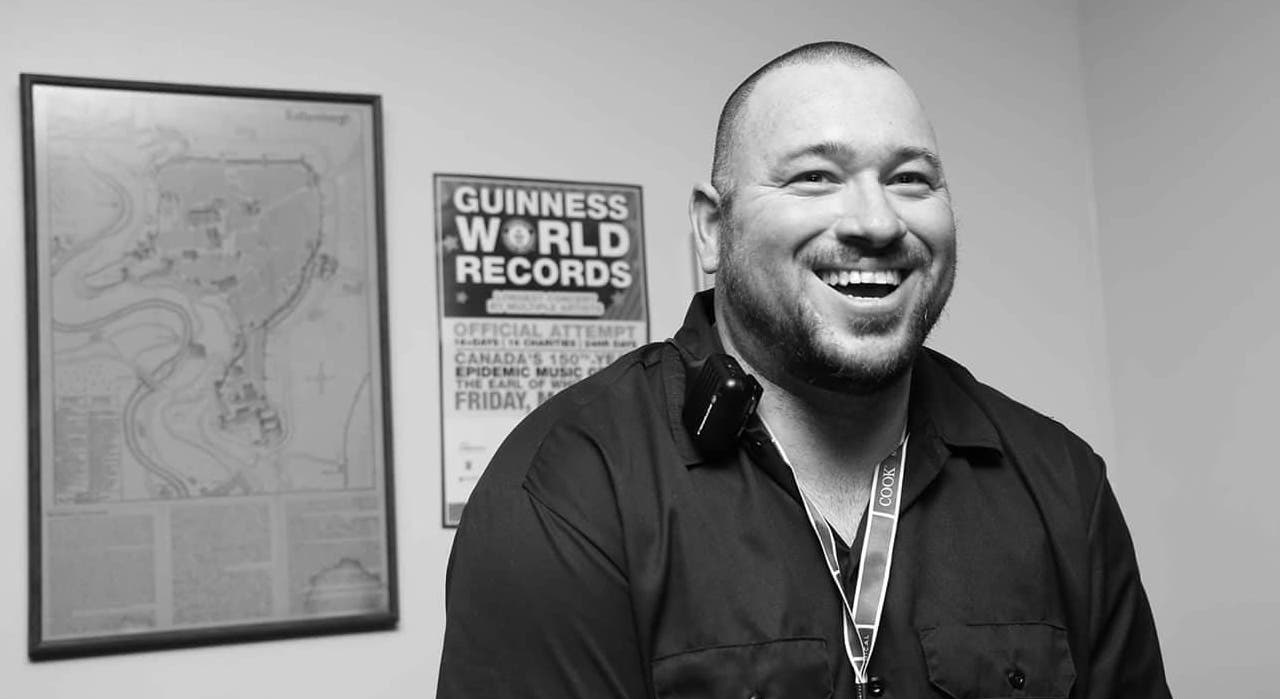 Summer is nearly here. Days are getting longer, the school year is winding down and, for a few months, working hard is a bit less of a priority. Many are looking forward to relaxing on a patio, spending time with family or making a trip to one of the many outdoor festivals in the Markham area.

For lifelong Markham resident Chris MacBride, the opposite is true.

“Oh, it’s my busiest time of year,” says MacBride. “I love the summer but relaxing isn’t something I do during it.”

MacBride has provided local events with a vast array of technical services for more than 15 years. That means stages, audio equipment, lighting equipment and the people to set up and run it all goes through him. At just about any outdoor event through the summer you can expect to see his huge smile and hear his unmistakable laugh while making sure things go off without a hitch.

“Sometimes weather gets in the way, but other than that we do pretty well,” MacBride says with a chuckle.

In a typical summer, MacBride will be making outdoor performances possible at the Markham Village Music Festival, Markham Ribfest, Taste of Stouffville and the Thursday Night Concert Series at the Bandshell, to name a few. Working so hard to help everyone else relax has given him a unique perspective on the community.

“We’ve managed to maintain a small town feel even though we’re not a small town anymore,” he says. “It really feels like you know everyone, even if you haven’t met yet. I can’t imagine living anywhere else.”

MacBride was born and raised in Markham. After studying theatre production at Humber College, he came home and went to work at the FLATO Markham Theatre. He’s been a fixture there as a full-time technician ever since, where he can be found at home behind the sound board for most performances.

In his more than two decades at the theatre, he’s had the chance to work with world renowned artists and community groups like Uninoville Theatre Company and Markham Youth Theatre.

“Mixing great bands like Future History, Jerome Tucker Band and the Great Lake Swimmers is a real treat,” says MacBride, “But getting a chance to work with emerging and developing local artists  is an honour.”

Last year, his love of local music was put to a true test when he took the job as technical director of an attempt to set a world record for the longest uninterrupted concert in history. The show, at a pub in Stouffville, started on March 17 and ran, without a break, until April 4.

“I mixed about 200 bands in 18 days.” says MacBride “That’s about what I would otherwise do in half a year.”

The Guinness people certified the record and everyone involved was exhausted. MacBride’s love for local artists remained unscathed.

“The last few years, the music community around here is second to none,” he says proudly. “Music people in Markham are like no one else. They make you feel like family.”

And family is something MacBride knows about. A single dad of two daughters, Antonia 18 and Lydia 10, a lot of their own family time is spent sharing in the festivals where dad works so hard. In recent years, you can often see his girls with him at the soundboard having a great time.

He says watching his family grow into the community he loves so much is easily the highlight of his career. When asked what the runner up is, MacBride doesn’t even hesitate.

“Listening to the voices of your own community is something special.”