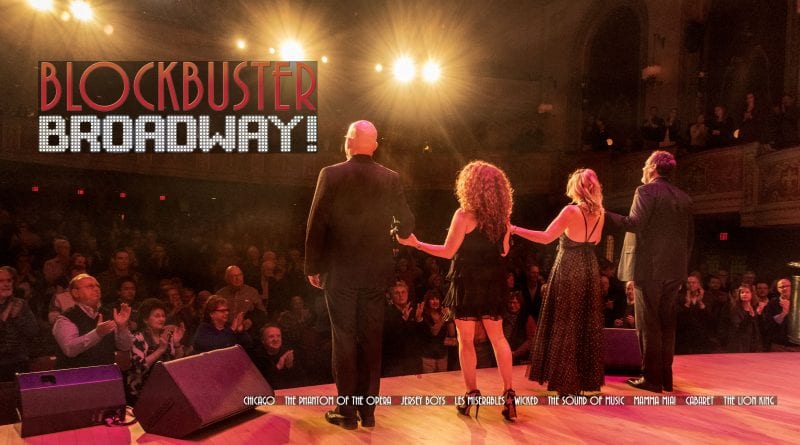 Cabaret is one of the fastest-growing theatrical forms in North America.

It’s much more than a concert, but less demanding than a traditional musical. Essentially, cabaret is a performance of music and storytelling where the performers portray themselves.

Blockbuster Broadway is New York City performer and arranger Scott Coulter’s take on this growing trend. The show features some of the best music, from the legendary Manhattan Theatre district, sung by some of its own voices. In keeping with the cabaret-style, the singers will also share their thoughts and experiences from life in the fiercely competitive world of Broadway.

The show comes to The Flato Markham Theatre on September 28.

“I think people like to be entertained and that’s what cabaret/concert-style performances are all about,” Coulter says. “The relationship between the artists and the audience is what makes an evening special. By adding stories and a touch of historical anecdotes to the proceedings the audience gets to know the performers and the songs in a way they don’t get in a typical concert.”

Coulter will be joined on stage in Markham by guest soloists Jessica Hendy, Kelli Rabke and pianist John Boswell.

Coulter himself is one of New York’s most awarded male vocalists. He’s an Emmy-nominee for his work for the TV show, “American Song” on PBS.

Keeping the group accompanied for the night is Boswell. In addition to being one of Broadway’s finest pianists, he has also served as music director for Andy Williams, Judy Collins, Sheena Easton and more.

“We want to celebrate the songs that have found their way into the soundtrack of our lives and, in many cases, we’ve found ways to present them in new and thrilling ways,” Coulter says. “All the songs come from shows that ran five, ten, fifteen, twenty, and in one case thirty, years on the Great White Way.”

The show features the title song from The Sound of Music, For Good and Popular from Wicked, Can’t Take My Eyes Off of You from Jersey Boys, I Dreamed a Dream from Les Miserables, and A Whole New World from Aladdin to name just a few. Any fan of musical theatre will likely not be disappointed.

“Everything from West Side Story to Wicked will be represented,” Coulter adds. “ It is our hope that audiences leave feeling they’ve made new friends both with the performers and with material presented.”

The four recently worked directly with the Oscar and Grammy award-winning composer Stephen Schwartz, whose work includes Godspell, Wicked and Enchanted. Schwartz then described the experience by saying that one of the best things that can happen to a composer is to have his music interpreted by Scott Coulter.

“We’ve played Canada many times over the last few years, everywhere from Calgary to Winnipeg to Victoria,” Coulter says. “This will be our first time in the area. We’re thrilled to be coming to Markham.”

Aside from performing for a brand new audience in Markham, Coulter minces no words in describing what the most memorable aspect of the show will be.

“The evening will be a reminder of how moving and soul-stirring the music of Broadway can be,” he says.

Blockbuster Broadway runs at the Flato Markham Theatre on September 28 at 2 p.m. and again at 8 p.m.