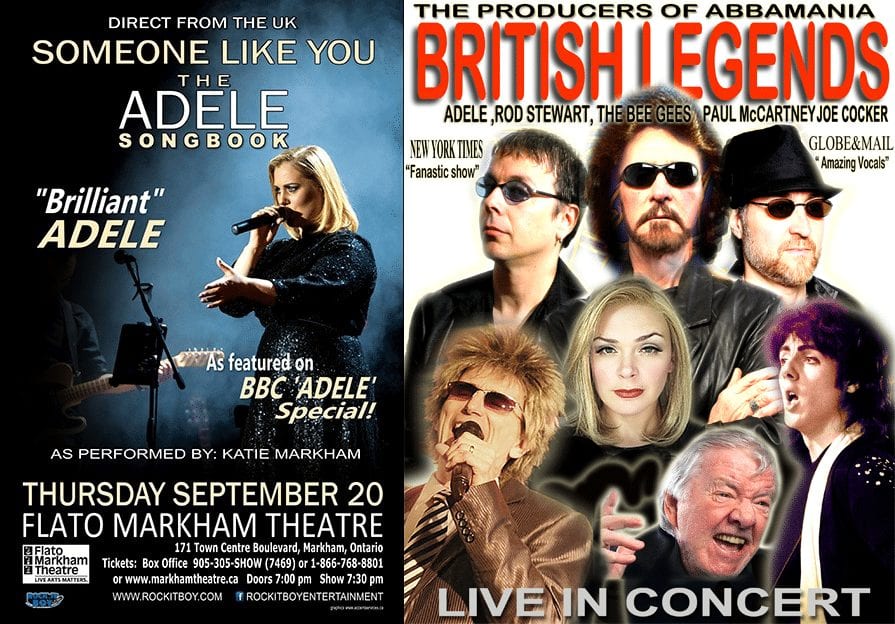 No need to go across the pond to hear British pop and rock legends light up a theatre. They’re coming to you — sort of. Two concerts in September at the Flato Markham Theatre are bringing British fever to town.

Adele tribute artist Katie Markham will be presenting Someone Like You: The Adele Songbook on Sept. 20. Markham was a finalist on the United Kingdom’s X Factor and was hand-picked by Adele herself on a BBC special to find the best Adele impersonator.

This isn’t karaoke. The singer is bringing a seven-piece band to back her as she “faithfully recreates” hits from Adele’s multi-platinum studio albums, 19, 21, and 25.

Markham isn’t merely pretending to be Adele, but rather delivering the Adele experience. To do so, she goes through extraordinary lengths, from mirroring the pop star’s vocal trills to selecting outfits and hairstyles one might expect from the real Adele.

“When Italians chat, their hands and fingers do the talking, and when Adele sings you see something very similar,” said Markham, from her overseas tour. “She is incredibly vocal with just her gestures. I used to study these things whilst she was talking in interviews or during certain songs. I think much of it now is so second nature to me that I find I do it in my own non-Adele shows too.”

Even though Markham’s act has been seen by millions and been endorsed by Adele herself, she feels a pressure to get it right with every show.

“I get really nervous right before I am due to walk out to sing,” she said. “I panic about how the audience will react, even though they have been amazing at every single show. Maybe that is healthy though. I actually try not to worry about becoming Adele too much and just sing the songs with as much passion as I can.”

Clearly, it’s working. The result is a show that brings Adele to audiences that might not get a chance to see the original songstress.

Katie Markham is in good company, as a second Adele will be performing at the Flato Markham Theatre a week later, as part of the British Legends show on Sept. 28, also featuring tributes to Rod Stewart, Bee Gees, Paul McCartney and Joe Cocker.

“You will hear every song done note for note, chord for chord, exactly like the original records,” promises concert producer Sunrise Concerts, the company behind the successful Abbamania tribute tour.

British Legends is as much about nostalgia with hits from Paul McCartney and Rod Stewart as it is about celebrating the British Invasion, which transformed North American music.

As for two Adeles in one month, Markham isn’t worried.

“The more the merrier is what I say,” she said. “Ultimately, everyone who does this sort of thing is doing it because they are massive fans themselves. Just look at how many Elvis impersonators there are out in the world.”

While Markham says she never tires of the show, thanks to changing up arrangements and switching set lists, the routine doesn’t come without its own rather unique hazards.

“Quite often I stop in a shop and think, ‘That looks like something Adele would wear,’ before my partner drags me off before I spend too much money,” she confessed.

Tickets to both shows can be purchased at markhamtheatre.ca or by calling 905-305-7469