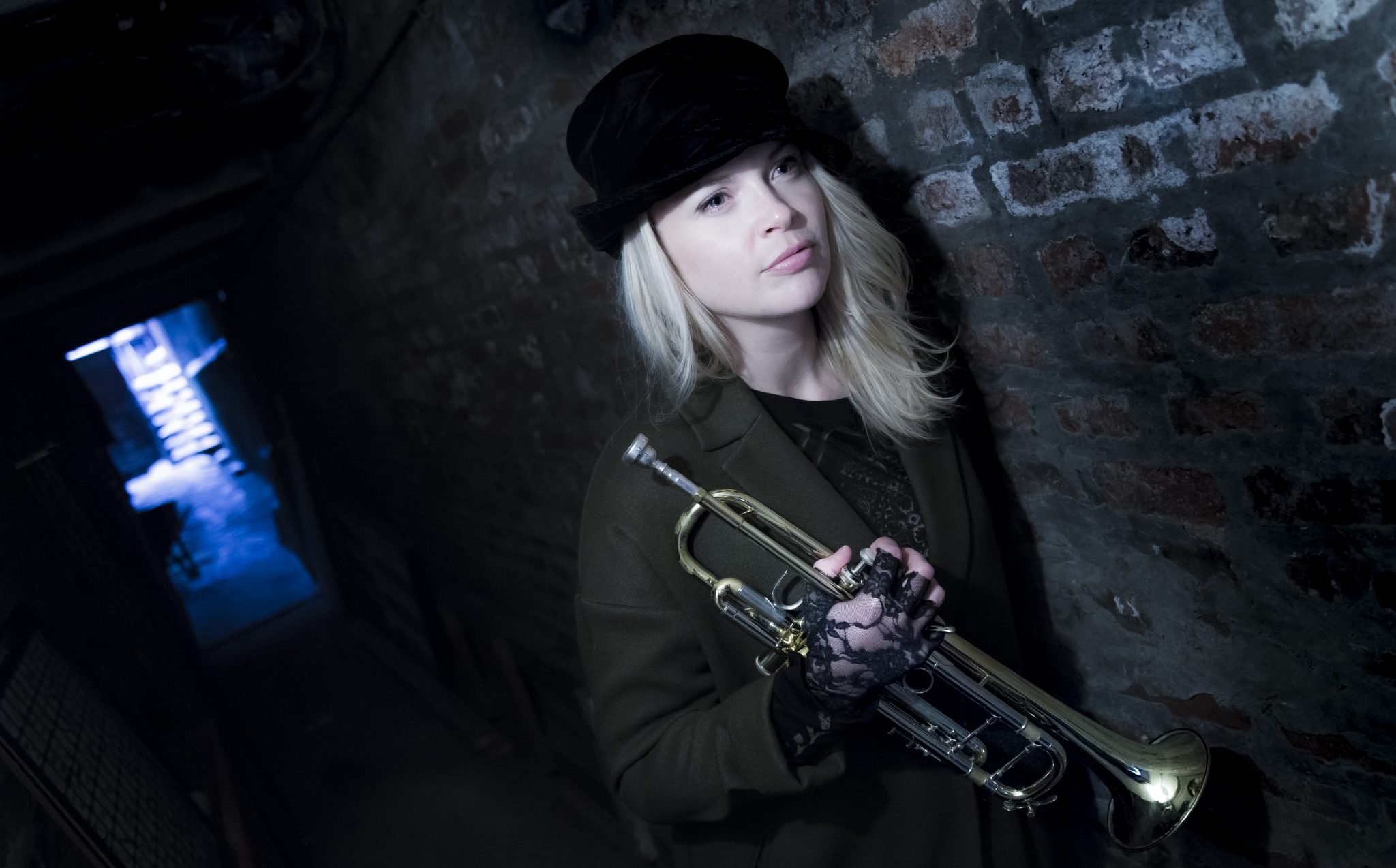 The New York Times called her the “shining hope of jazz.” The Wall Street Journal declared her to be “one of the most versatile and imposing musicians of her generation.”  Legendary music producer Quincy Jones compared her directly to Louis Armstrong himself. How does a humble millennial woman from Chilliwack, British Columbia come to garner such attention?

Her advice is simple, but probably the most important thing about her seemingly improbable path to becoming recognized as the future of a style of music that began in the deep south of the United States nearly a hundred years ago. Bria Skonberg brings her modern take on New Orleans inspired jazz to the Flato Markham Theatre on Sept. 29.

“I’ve always associated music with fun, community events,” says Skonberg. “My older brother started on fiddle, so we would go to these fiddle competitions and just hang out all day listening to music, having a blast.”

She likens the memory and music to the part of her that is truly Canadian. It wasn’t long before her ear was caught by other sounds.

“In Chilliwack, they had this jazz festival that always incorporated youth and youth bands. So, every year the whole town got together and listen to great live music.”

She credits the memory as her inspirational starting point in music. It was in high school, however, where she started to learn the skills she still uses today.

“I basically did everything I could: music, student council, drama, and planning events,” says Skonberg. “And I ended up with a melting pot of skills.”

Despite those skills, she was unsure of her calling when it came time to graduate. Like many in her shoes, she turned to a counsellor at the school. Unlike many, she got advice that fuelled the rest of her life.

“It was basically one great counsellor that said to me, ‘you should go into music’,” she recalls. “I was told by some other adults that it was foolish, but my parents were behind me. So, I was off to study music.”

It was somewhere between starting school at the Capilano University prestigious music program to study jazz trumpet, recording her first record and deciding to drop everything and move to New York City in 2010 that someone first told Skonberg to ‘get uncomfortable.’

“That’s why I moved to New York,” she says. “Living in Canada, up in Vancouver, was beautiful but I knew that I needed to get a little uncomfortable in order to grow.”

And grow she has. She has appeared as a band leader and guest artist at festivals in North America, Europe, China and Japan. She has recorded five albums. The most recent, With A Twist, won a Juno award for best jazz album. She won the Swing! award from Jazz at Lincoln Centre.

She even helped to co-found the New York Hot Jazz Festival. Skonberg has gone from a fan being inspired by this music to being a leader of its community. She even plays in her hero’s backyard.

“Louis Armstrong’s house in New York, where I live, is a museum now and I get to play there a bit for special occasions. It’s really special”

Her most recent musical ‘pinch-me’ moment came at the historic Apollo Theatre. She was invited to join members of the Sun Ra orchestra to back up stadium rockers U2 on their classic Angel of Harlem, for a television special. Their appearance was a surprise for the 1,200 packed in to the tiny theatre, saved for the encore.

“I loved the moment before the curtain goes up,” Skonberg said. “Just thinking, ‘these people have no idea what’s coming.’”

Despite her appearances with others, being a band leader and a solo artist are what she treasures most.

“With my band, there’s an opportunity to share more of yourself and have an authentic connection with the audience,” she says. “Every show is different because I’m constantly inspired by new things.”

For her solo shows, she leads a quartet through everything from Louis Armstrong to Leonard Cohen. Skonberg has become a specialist in classic American or New Orleans style jazz, so her set features music that connects to that entire tradition.

“I’ve played with this band now for a couple years and we’ve really developed some nuances,” she said. “Everybody really knows each other well,”

The Markham show will feature songs from her last two albums but also a preview of her next.

“We’ve been sneaking some new songs into the set this summer,” Skonberg explains. “The album we’ll be more original stuff and then a couple of interesting mashups.”

Beginning work on the music for her next record has begun to strike a more topical note in Skonberg.

“Some of the numbers are more topical. It’s interesting to play songs from another era that, unfortunately, still apply. It’s an interesting time we live in.”

Skonberg’s interest in community has changed. As a young woman, she drew endless inspiration from it and it gave her music. Now, having become a student of music that carried a generation of communities through tough times, the civil rights era and the great migration, she is seeking to give something back.

“There’s always been a reference to the past, for me; where the music has come from,” she says. “I like that depth to be there; that story. Sadly, it’s still something that we all can feel.”

Seemingly, Skonberg continues to get uncomfortable. Perhaps we’ll all grow a little bit as a result.

Bria Skonberg and her quartet play Markham Theatre on Sept. 29. Tickets are available by calling (905) 305-7469 or online here

There’s a pledge music campaign so fans can be a part of creating Skonberg’s next record. Go here to get involved.