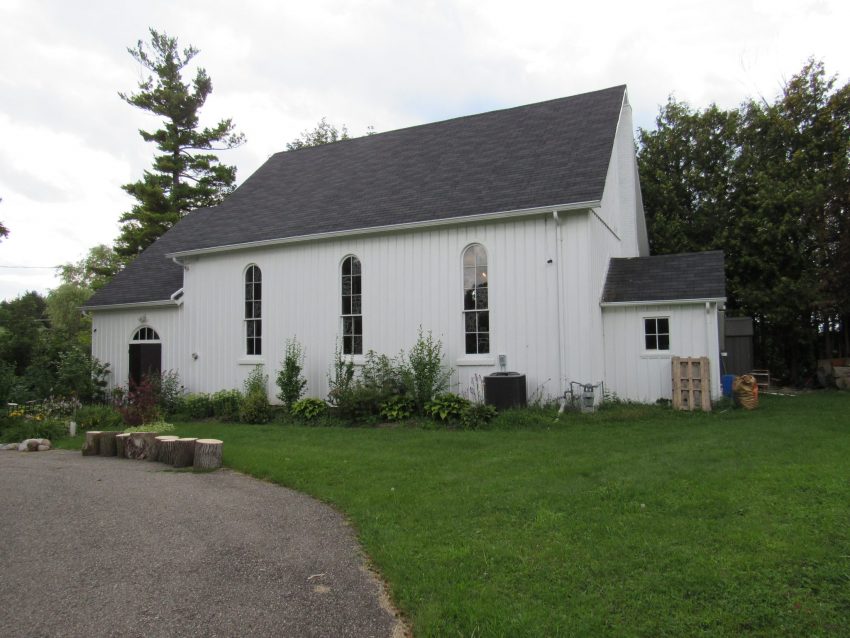 One of the most picturesque locations in all of Markham is found where Fourteenth Ave. takes a detour around the banks of the Rouge River, a short distance west of Old Ninth Line. On the crest of a hill proudly stands a white frame church that overlooks the winding road, and the greenery of the valley. This is the community of Box Grove, a neighbourhood in the south-eastern part of the city that has seen much building activity in the last few years.

Today, Box Grove is a desirable location from a real estate point of view, but there was a time when the crossroads was shunned by devout farmers who were wary of the reputation of the local taverns that provided a source of temptation that was best to be avoided. In its formative years, the community was known as ‘Sparta’, named in remembrance of the legendary city-state of ancient Greece

The establishment of industries including a saw mill, a woolen mill, and a cloth recycling ‘shoddy mill’ formed a nucleus around which a cluster of residences and businesses formed. Other local industries included a cooperage, where barrels were made, a tannery where leather was cured, and a foundry for the casting of metal objects. Modest frame houses were built on the Tomlinson and Beebe lots in the mid-19th century, mainly lived in by the workers who laboured in this rural industrial park of its day. If you know what to look for, you can spot some of these old workers’ cottages by their one and a half storey height and low-pitched gabled rooflines. They stand next to more recent suburban houses clad in stone and much larger in size than what a sawmill worker could have afforded.

The Tomlinson family and Beebe family were the prime movers of the area’s early development. In 1850, a village plan was registered that formalized a series of lots along the frontage of the farm properties owned by those early families. When the plan was drawn up, there were already some buildings existing on some of the lots, which means that some of the land had been sold off or at least rented and built upon prior to 1850. A few of those old buildings remain standing.

In 1867, the year of Canada’s Confederation, a post office was opened under the name ‘Box Grove’ rather than Sparta. The name ‘Sparta’ had been granted to another Ontario post office, so it could not be repeated here. The post office was located in the McCaffrey general store, which still stands near the four corners in a somewhat altered state, but still recognizable as a former place of business that also had a residence attached for the use of the proprietor and his family.

William Beebe’s blacksmith and toolmaking shop is perhaps Box Grove’s most noteworthy historical claim to fame. Beebe was known as a particularly skilled producer of woodworking tools and his products, stamped with his name, were sought out by those in need of high-quality tools in the 1800s. They continue to be cherished by modern-day antique tool collectors. The shop is long gone but its image is preserved in an archival photograph in the collection of the Markham Museum.

The most memorable of Box Grove’s notorious taverns was the ‘Stone Jug.’ It stood on the north west corner of Fourteenth Avenue and Old Ninth Line, opposite the Beebe shop. Its former location, not yet built upon, is marked by a depression in the ground. The Stone Jug was owned and operated by James Mapes. While other buildings in the hamlet were made of wood, the Mapes hotel was a full two storeys tall and made of stone. A distinctive cupola decorated its roof. It is unfortunate that fire claimed this unique building in the 1920s.

Two significant landmarks remain to mark the community’s historical roots. One is the board and batten Methodist church mentioned at the beginning of this article. It was built in 1877 to replace an older structure that had grown too small to serve the congregation. The Box Grove Church has a twin in the community of Hillside, Scarborough, within the Rouge National Urban Park. That church is no longer in regular use for services, but the Box Grove church continued as a United Church until recent times, when it was sold for the use of another Christian faith group. The other Box Grove landmark is the little red schoolhouse on the east side of Old Ninth Line, south of Fourteenth Avenue. Like the church, the school was built in 1877 to replace a smaller, older building. Today, the one-room public school building serves as a community centre.

Further to the above story by local historian George Duncan is the letter to the editor below from Ian Irving.

For the record, my family and I were the first residents in the Legacy Subdivision Oct 1997.

I immediately went about starting a house fellowship which eventually became Rouge River  Christian Fellowship.  The Pastor was Don Hutchinson, and I was the lay elder. We met in two locations. The Community Centre and the Box Grove Church.

The owning church Box Grove United was a three-point charge with one minister.  We met in the Box Grove Church on Sundays.  Subsequently, The United Church of Canada ( UCC ) decided to merge the three congregations into one and so had no further use for the Box Grove Church. We rented it for our sole use.

Some years later UCC decided to sell the property. The Sunni’s and the Shi’ites were outbidding one and other.   I had the title checked and discovered the church, as usual, was registered with three individual trustees   Underneath the title there was a trust deed that Sarah Tomlinson had placed on the property. She had given the land to be used solely as a Protestant Christian Church and graveyard. If it was to be used in any other fashion, the land and buildings were to revert to the Tomlinson family.   UCC finally admitted this was the case and we bought it along with a larger fellowship. We amalgamated, renaming the owning fellowship, Full Gospel Assembly of God, a Pentecostal Assemblies of God fellowship.  This is a multicultural church.

The Church is in use two nights per week and from 10am until 1:30pm by us and is rented from 2pm to 4 or 5 pm on Sundays. It is a living organism full of Father, Son and Holy Spirit.  The Sunday afternoon fellowship is mainly comprised of Jamaican worshipers.

The old Methodist church, built in 1877, is a landmark in the historic community of Box Grove.

One thought on “Box Grove contains a box of many mysteries”

If you like getting around on two wheels, you’ll want to ‘get in the zone’ after learning the City of