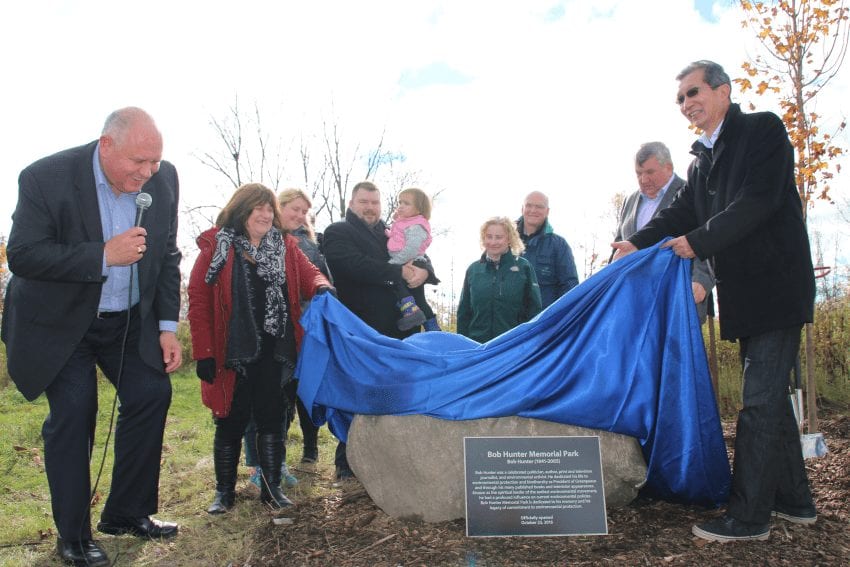 Journalist. Conservationist. Rebel. Hero. Bob Hunter was all these things and more. Now a stunningly beautiful tract of land in Markham has been named in his honour. The Bob Hunter Memorial Park was officially opened on Saturday, Oct. 22 at the primary trailhead located at 7277 14th Avenue in Markham.

In 2005, the Ontario Government announced it would create the Bob Hunter Memorial Park in the Rouge River watershed – named for the well-known activist, founding member of Greenpeace and popular television broadcaster. In 2010, the Regional Municipality of York gave $6 million to the Rouge Park Alliance and Toronto and Region Conservation to restore and develop the Bob Hunter Memorial Park. The funding was part of a larger project being implemented by York Region in Markham.

“We’re proud to have helped create this park – a testament to the work Bob Hunter did and a fitting tribute to a man who dedicated his entire life to protecting the environment,” said Wayne Emmerson, York Region Chairman and CEO.

Led by TRCA, the restoration work included the construction of six kilometres of trail, the planting of shrubs and wildflowers and the creation of numerous wetlands and meadows. Bordered to the north by Highway 407, to the south by Steeles Ave. to the west by the Canadian Pacific Railway line and to the east by Little Rouge Creek, the park is 192.678 hectares (476.119 acres) in size and will provide a gateway into Rouge National Urban Park once TRCA completes the transfer of lands to Parks Canada.

The official opening of the Bob Hunter Memorial Park featured a guided trail walk and speeches from various dignitaries and officials from the partnering municipalities, TRCA and Parks Canada. Members of Bob Hunter’s family were also in attendance.