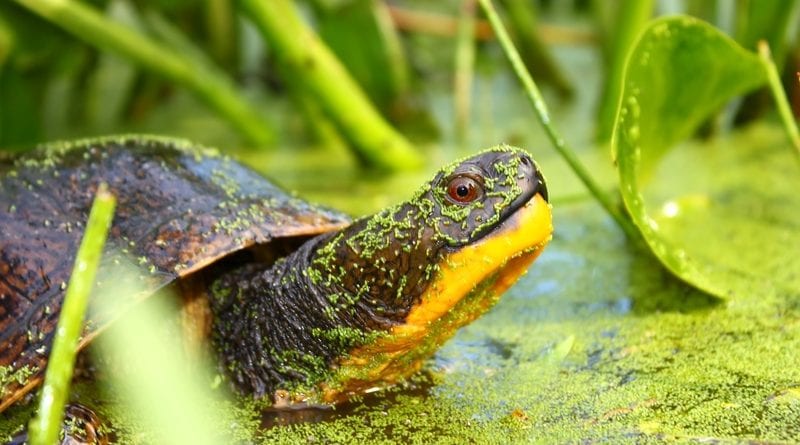 Fifty-seven baby Blanding’s turtles got a head start in the Greater Toronto Area’s (GTA) Rouge National Urban Park today thanks to a collaborative head-start program co-led by Parks Canada and the Toronto Zoo.

This was the seventh year that Blanding’s turtles – federally-listed as endangered and provincially-listed as a threatened species – have been reintroduced into the park. These Blanding’s turtles were rescued as eggs from nests vulnerable to predation in a stable, source population in central Ontario and have been raised in a protected environment at the Zoo for two years. Thanks to this initiative, so far, almost 400 of these turtles have been restored to the Rouge.

“All eight turtle species in Ontario are federally listed as at risk and need our help,” said Dolf DeJong, CEO, Toronto Zoo. “Blanding’s turtles are a flagship species representing a group of animals facing a variety of threats right here in our own backyard. Your Toronto Zoo is proud to be joining forces with these important community partners in educating the public on their plight in the wild and in doing everything we can to mitigate the threats they face and halt declining populations.”

“Parks Canada is committed to working with its partners to protect species at risk like the Blanding’s Turtle in Rouge National Urban Park,” said Omar Mcdadi, Field Unit Superintendent, Rouge National Urban Park. “Amphibians and reptiles, including Blanding’s Turtles, are great indicator species. These 57 turtles will be monitored for years to come, helping to track the health of wetlands in the park. This informs restoration projects throughout the Rouge to ensure we are preserving nature in Canada’s first national urban park for future generations.”

Canada’s first national urban park spans more than 79 km2 in the GTA, making it one of North America’s largest protected areas in an urban setting. The Blanding’s Turtle Head-Start Conservation Program in Rouge National Urban Park is part of a significant partnership to help recover this at-risk species.