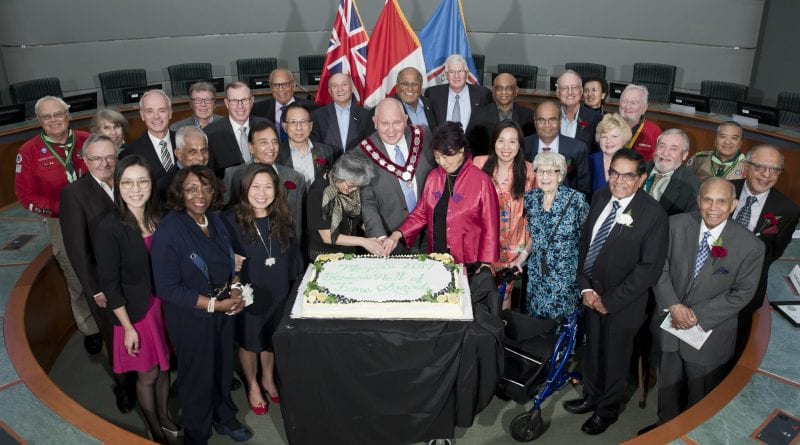 Retired track and field star and pharmacist Bill Crothers is the recipient of the 2019 Mayor’s Seniors’ Hall of Fame Award.

At one point, Crothers held the Canadian record in all distances from 400 metres to 1,500 metres and held the world 800 metres indoor record. He was named Lou Marsh Trophy winner as Canada’s top athlete of 1963 and represented Canada in the 1964 Tokyo Olympics, where he won a silver medal in the 800 metres. He also competed in the 1962 and 1966 British Commonwealth Games, and the 1967 Pan Am Games.

The Hall of Fame Award is presented annually to a nominee who has made a significant contribution to life in the City of Markham, is more than 60 years of age and has been a Markham resident for at least seven years.

Crothers has been inducted into the Canadian Olympic Hall of Fame, Canada’s Sports Hall of Fame and the Ontario Sports Hall of Fame. He participates on several boards, including Flato Markham Theatre, Markham Stouffville Hospital Foundation, and Friends of the Markham Museum. Bill Crothers Secondary School opened in his honour in 2008 and is known for its focus on sports.

The Seniors’ Hall of Fame Awards were presented at the Markham Civic Centre on Thursday, Oct. 3 and recognized volunteers for their years of service, passion and leadership in the community.

Paul Saval, a Markham resident for 45 years, was one of two recipients of the Meritorious Award. He formed the Sayal Charitable Foundation 25 years ago as a philanthropic arm of his business, Sayal Electronics. His foundation continues to support various charities across the community.

Fellow Meritorious Award recipient Eric Tappenden has been an active community volunteer since 2003. He serves on the Board of Governors at Markham Stouffville Hospital and since 2011 has been a co-chair of the York Regional Police Advisory Committee and Police Appreciation Committee.

Certificates of Appreciation were awarded to Pam Birrell, Branch Duncan, Pat Howell and Jim Sandiford for their work within the community.

“The City of Markham is home to so many great men and women, who in their golden years, are serving others,” says Yash Kapur, Chair of the Mayor’s Seniors’ Hall of Fame Committee. “These exceptional seniors, with a passion for volunteerism, have touched the lives of so many of us and each have contributed in their own way to make Markham one of the best cities in Canada.

“They are our role models and deserve our highest appreciation and regards.”

Past Mayor’s Seniors’ Hall of Fame Meritorious Award winner Carol Williams-Wong was the event’s keynote speaker, while MPP and Parliamentary Assistant to the Minister for Seniors and Accessibility Daisy Wai was a guest speaker.