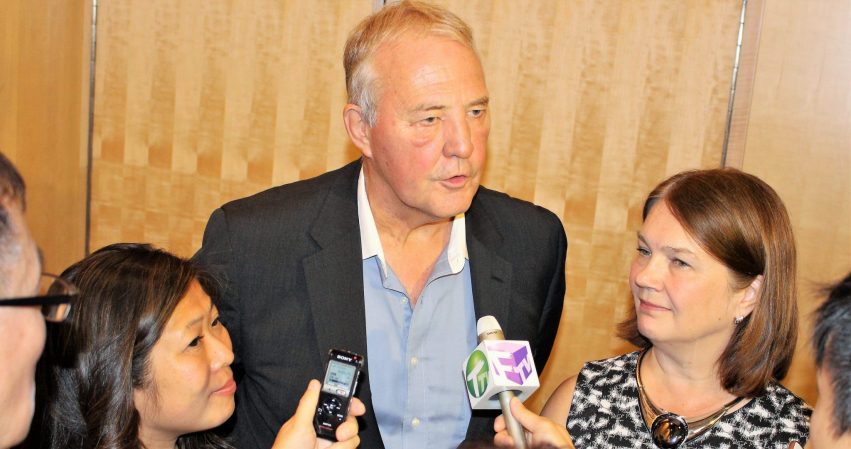 It was a meeting of political minds at the community gathering held to discuss the legalization of cannabis, an issue that has community members ramped up.

Philpott addressed the packed auditorium by acknowledging the local councillors in attendance, “kudos to them because this is a team sport and its fantastic to see that the municipal leadership is here and enthusiastically getting informed.”

She also touched on the school issue and educational materials at point of sale, “one of the reasons why we’re making sure and why we’re introducing this legislation, is to keep these products out of the hands of kids.”

“High school students now are consuming at very high levels, are not adequately informed and, as the public health professionals said, one of the reasons we haven’t educated as well is because this has been an illegal product and we certainly will continue to make sure people are educated,” said Philpott.

She went on to say that Cannabis regulation is not a new concept, and has been in place for medical use, a system that will adapt to regulations around recreational use.

“I think people need to be reassured that this not a brand new regime. The concept of regulating the production of cannabis is something that’s been done in the country for many years now and is highly refined. In fact, we have international visitors who come from all over the world to look at how Canada has regulated the production of medical cannabis. A similar type of very strict regulation will continue for the approved producers of cannabis for recreational purposes,” said Philpott.

Blair then took the podium to expand on the set up of the system led by Minister of Justice, Jody-Wilson Raybould and his own experience dealing with the cannabis as an illegal substance. “As a cop, I used to go into a lot of illegal grow ops and they were dangerous, they were mold infested, there was dangerous chemicals in there, there was fire hazards,” said Blair.

He then described his first impression of a licensed production facility, “you could eat off the floor. The air quality, the safety, the cleanliness, the sanitation, the security – I’d swear to God you were in a penitentiary” saying “the security was unbelievable.”

Blair claimed it was then that his scepticism as a former cop who had seen it “being done wrong in neighbourhoods and communities all over the GTA” lifted. “I’ve discovered it’s possible through an incredibly rigorous system of regulation to do this right,” said Blair.

Blair then stated that impaired devices would be ready in about two weeks time and be provided, with training, to the police force. “They’re already being used in Australia and about 18 different European countries and half a dozen states in the United States,” he said.

As for blowing the limit for alcohol and cannabis, Blair assured the group that “if somebody has .5 millilitres of alcohol and .25 mammograms of cannabis, the combination of those two things results in a new criminal offence.”

Premier Wynne announced today that the following provisions for young drivers (and commercial drivers) would be enforced for driving under the influence of cannabis:

For everyone else carrying a valid driver’s license, it will be between three and 30 days suspension and (up to) $450 in fines if caught with a blood-alcohol of .08 or less. Drivers with levels above .08 will face the same suspension time frame and a $550 fine.

Blair assured the crowd of the governments investment of $247 million in training for the police force, who have had what he described as success in dealing with gambling houses after they were legalized and regulated. He attributed that to the fact that the Toronto Police Service went from running 23 full time gambling units to none today.

“Organized crime doesn’t pack up and go away the next day but you can drive organized crime out of business. You do it through a combination of vigorous enforcement when they break the law but you take away easy market opportunities from them – we’re doing both,” said Blair.