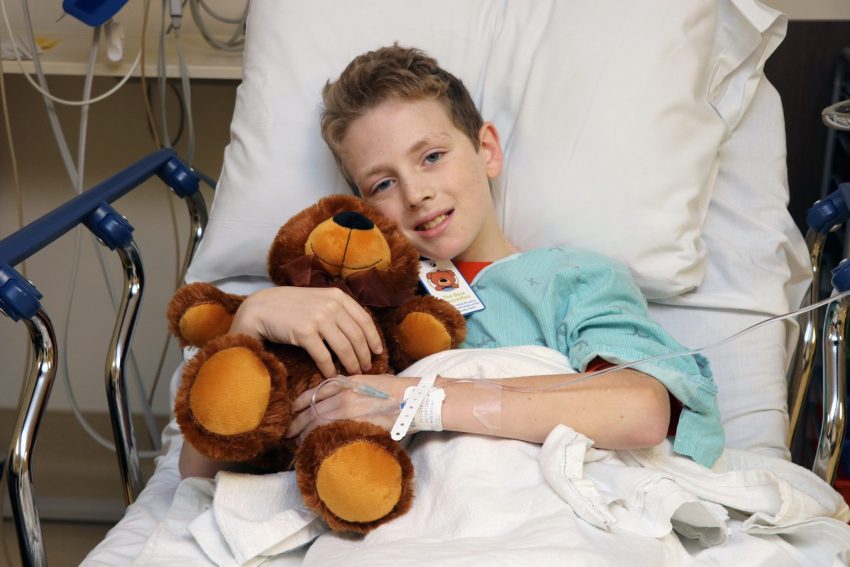 When eight-year-old Avani Janjua saw a billboard advertising Markham Stouffville Hospital’s (MSH) Bear Necessities program she asked her mom, Sara, to pull into the hospital immediately so she could buy a teddy for a patient. For patients spending time in hospital beds, especially during the holidays, it’s often the small gestures that can bring the most comfort.

In Andrew Bonello’s Grade 2/3 class at Black Walnut Public School, students are asked to complete acts of kindness and present them. Avani was thrilled to speak about her visit to the MSH Foundation office, where she purchased a bear and left a personalized note for the patient that would be receiving her gift.

That teddy bear ended up in the arms of 12-year-old Andrew Whitney, who was in need of a bear hug after his surgery.

“Thank you so much for the bear. It really helped take Andrew’s mind off some of the unpleasant things that he was going through,” said Dean, Andrew’s dad. “We both thought it was extra special that the teddy was given to him from a girl younger than him.”

In 2016, MSH launched the Buy a Bear campaign as an opportunity for the community to give back in a meaningful and tangible way.

Sara said her family was ecstatic to find out the bear was able to make someone feel better as well as giving back to their community hospital.

“This is our home hospital,” said Sara. “Avani and her brother were born here and this is where all of our medical needs are taken care of.”

In addition to providing bear hugs to patients, the funds raised also support the purchase of life-saving equipment not covered by government funding. In its first year, the program raised $30,000 and in 2017 caring hospital supporters raised $70,000 for vital medical equipment (more than doubling the year results from the year before) and allowed for 1,400 bears to be delivered to patients. This year, the campaign evolved into the Bear Necessities, along with teddy bears, sleep sacks for newborns and cozy adult-sized fleece blankets are also available for purchase.

The Bear Necessities program caught the attention of local businesses like Ravenshoe Group, a Markham marketing company, who committed to matching every bear hug purchased on Giving Tuesday – which falls the day after Cyber Monday encouraging giving back – to bring a little more holiday cheer to patients at MSH.

Through the support of the community and with the contribution of the matching gift from Ravenshoe Group, a total of $100,000 was raised — enough to deliver 2,000 bear hugs to patients over the holiday season. Bear Necessities were purchased online, at the hospital, through company fundraisers and at Scotiabank locations across Markham and Stouffville.

On the way home from MSH, Andrew told his dad that his teddy would be a perfect Christmas present for his little sister.

Bear hugs are needed throughout the year, beyond the holiday season. Visit lifesavinggifts.ca to purchase a Bear Necessity.