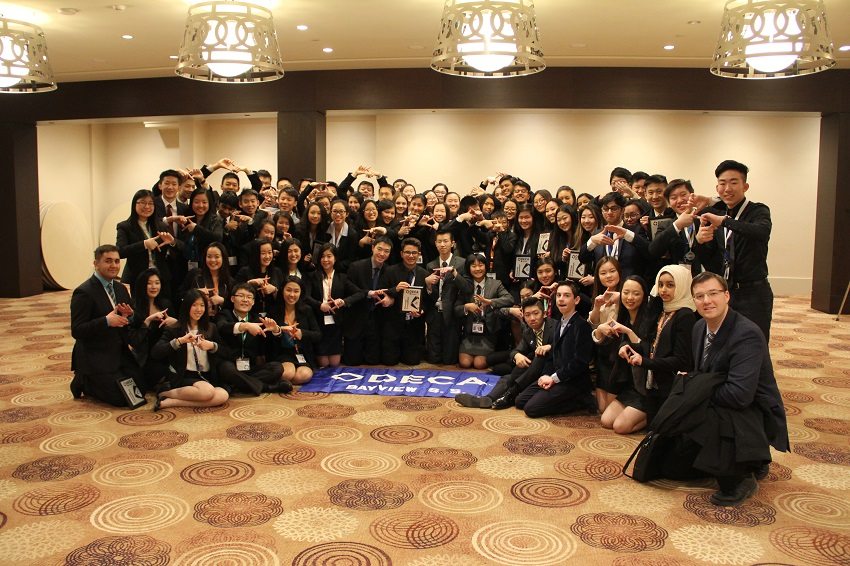 When a student thinks of DECA, they think of the experience, the competition and the people.
83 compassionate, driven, and hard-working students make up Bayview Secondary School’s
amazing chapter that is known as not just another club, but rather a family.

Bayview DECA is comprised of exceptional students from Bayview Secondary School, notably
residing in areas such as Richmond Hill, Markham and Vaughan. Many of these students
competed in all three tiers of competition, qualifying from York Regionals to Ontario Provincials,
and finally to the International Career Development Conference (ICDC) in Anaheim, California
this past month. These members have proven themselves to be exceptional and have
represented Bayview DECA as one of the strongest chapters in Ontario. 38 of Bayview DECA
members qualified for the ICDC stage, an astonishing 46 per cent qualification rate considering the
provincial average of merely six per cent.

Some students compete in oral categories, resolving business case studies and showcasing
their solution in a 10-minute impromptu presentation. Others compete in written categories,
where they start in September by preparing a 30-page report with an accompanying
15-minute oral presentation.

This spring, members worked diligently to bring out their best at ICDC, and altogether 76 per cent of
Bayview DECA’s delegates won accolades at this competition. Among these achievements,
Bayview DECA members won a record-breaking nine top three international trophies (representing
a quarter of all the trophies won by DECA Ontario). This is truly an amazing accomplishment
among all schools in the province.

Regardless of their respective individual success in competition, Bayview DECA members take
pride in cheering on their school’s competitors and creating their supportive family environment.
One can proudly say that the Bayview DECA chapter values community just as much as
competition, if not more. However, this chapter owes much of its success to the support of its
teacher advisor, David Vallier, whose contributions throughout the years have made the DECA
journey possible for all Bayview students.

Rachel Tong and Vanessa Chan, two senior student executives of Bayview DECA (who reside
in Markham), shared their experiences with DECA over the years:
“DECA has been a defining extracurricular activity in my four years of high school. This year,
serving as the Vice President of Competitions, I got to do my part and give back to a club that
has given me so much. Being able to witness first hand the great heights the chapter achieved
this year makes me unbelievably proud and thankful to be a part of Bayview DECA,” said Rachel
Tong.

“As the current Vice President of Public Relations, I was incredibly proud to see our shy, new
members transform into confident members of our Bayview DECA team. From standing on the
ICDC stage to cheering on my friends until I lost my voice, every bit of the Bayview DECA
experience has been unforgettable,” said Vanessa Chan.

Bayview DECA is a chapter that prides itself in its achievements year after year. More
importantly, this chapter is proud of the community that has been formed from the bond the
students share in this outstanding club. As the year comes to a close, DECA has once again
empowered its members to challenge themselves and achieve beyond their own expectations.
This journey has been nothing short of phenomenal and the world has yet to see what Bayview
DECA accomplishes in the future.