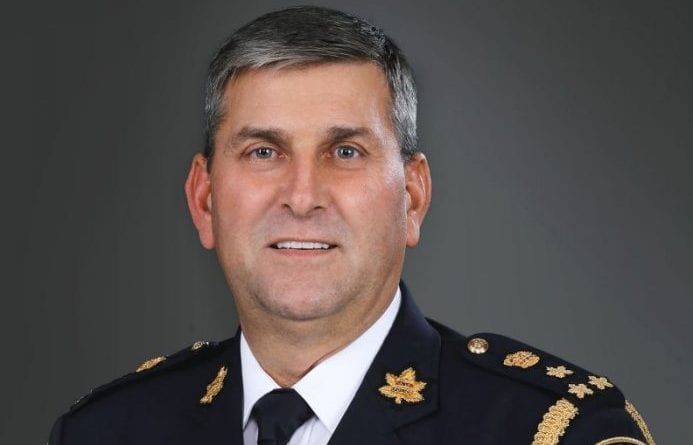 York Regional Police (YRP) Chief Eric Jolliffe is being remembered as a “strong, approachable and compassionate leader” upon his retirement.

“Policing one of Canada’s fastest growing and most diverse communities, Chief Jolliffe developed a strong connection to the community through the development of outreach programs aimed at building relationships and trust,” says York Region Chairman and CEO Wayne Emmerson. “As a vision-inspired and values-driven leader, his legacy of dedication, commitment and community leadership will continue for generations to come.”

Jolliffe, a Thornhill native, launched his career with the Edmonton Police Service in 1979. He joined YRP in 1981 and held a variety of administrative and operational roles before taking over the reins in December 2010. He earned a long list of academic credentials, graduating from the Federal Bureau of Investigation (FBI) National Academy, the FBI Law Enforcement Executive Development Program, University of Toronto’s Joseph L. Rotman School of Management Police Leadership Program and the Senior Management Institute for Police under the Police Executive Research Forum and the Institute for Strategic International Studies.

He accumulated numerous awards over his career, including the Police Exemplary Service Medal and 30-Year Bar, Her Majesty Queen Elizabeth II Golden Jubilee and Her Majesty Queen Elizabeth II Diamond Jubilee medals for outstanding service, and the Officer of the Order of Merit of the Police Forces. In 2016, Jolliffe received the Outstanding Achievement Award from Parents, Families and Friends of Lesbians and Gays Canada/York Region. The following year, he received the Public Service Award from the Transformation Institute for Leadership & Innovation and in 2018, he received the President’s Award for Leadership from Ontario Women in Law Enforcement.

Jolliffe decided to use a retirement celebration rescheduled to September to raise funds to support the wellness of YRP members and their families. “The whole concept of wellness, especially in terms of mental health, has come into much sharper focus in recent years across the policing profession,” Deputy Chiefs Brian Bigras, André Crawford, Jim MacSween and Robertson Rouse say in a statement. “It is also a cause that Chief Eric Jolliffe has championed over the course of his 40-year career.”

Jolliffe was initially scheduled to depart YRP in September 2019 but his contract was extended so he could assist the York Police Services Board in the succession of power by providing support and mentorship to future leadership. York Region proclaimed Thursday, April 30 Chief Eric Jolliffe Day in York Region in recognition of his retirement. Chief-Designate Jim MacSween will be sworn in on Friday, May 1.