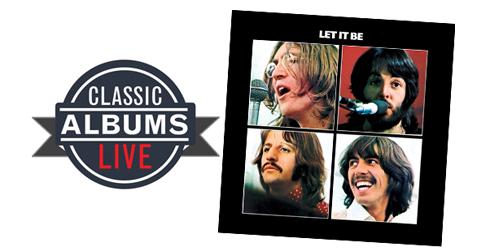 Arguably the greatest music group in modern history, the Beatles also are one of the few to call it quits at the top of their game.

The Fab Four broke up in April of 1970, one month before releasing their final album, appropriately called, Let it Be.

With the 50th anniversary of the album fast approaching, the Flato Markham Theatre is offering audiences a chance to revisit the classic in January with a performance by Classic Albums Live.

The story and backstory of this album, however, is one of repeated false starts, failed creative growth, and acerbic disagreements. This tumultuous period in the band’s history is marked by George Harrison’s temporary departure, two different producers, a documentary film and the abandoning of the project in favour of starting anew (on the album that became Abbey Road).

Nevertheless, once the project was handed over to legendary American record producer Phil Spector, a fascinating, beautiful, and singular Beatles record emerged. Let it Be, Get Back, and A Long and Winding Road are the chart topping songs on this record, but tracks like I Me Mine, Across the Universe, Two of Us, and I’ve Got a Feeling are the backbone.

The record is, unquestionably, best listened to from start to finish complete with clips of the band between takes interspersed. This is where Classic Albums Live comes in.

Just like how a symphony endeavours to present a pure listening experience, Classic Albums Live has built its reputation on creating a note perfect musical experience for fans of the classic rock era of music. Each show features a classic album performed in its entirety and with every arrangement, note and sound presented as it was on the original piece.

“We are not a tribute band and we don’t dress up in costumes,” explains Classic Albums Live’s founder, Craig Martin. “We care about musical perfection.”

This is especially important for an album like Let it Be because, despite it being one of the Beatles’ most playable records, the recording is full of ear candy for the listener like string sections, sound effects, and even clips of the band in conversation. Classic Albums Live seeks to complete the live listening experience.

“You don’t see the Mona Lisa from the eyebrows down — you want to see the whole thing,” explains Martin.

When Let it Be was released, stories of tearful listening parties in living rooms across the world were told. Indeed, the social ritual of listening to albums together is one of the biggest casualties of modern music making.

This show is a chance to revive this ritual while also making it a new social experience. While Martin calls this the modern symphony, it’s also the 21st century version of a basement album listening party.

“It’s always important for the audience to understand,” explains Rob Phillips, a music director for Classic Albums Live, “it’s really just the experience of putting on headphones, putting on an album and letting your mind go along on this journey with music for 45 minutes.”

The group achieves this by assembling a group of all-star session and performing musicians who then analyze; recreate, and perform every sound that appears on the record in question. For the show in Markham, Martin explains that in addition to the complete Let it Be being performed in its entirety, the group will return for a second set of The Beatles greatest hits.

“We absolutely love coming to Markham,” he said. “Being from Toronto, it’s like going to visit your favourite neighbour.”

Classic Albums Live presents The Beatles’ Let it Be on January 30 at 8 p.m.
Tickets available at www.flatomarkhamtheatre.ca