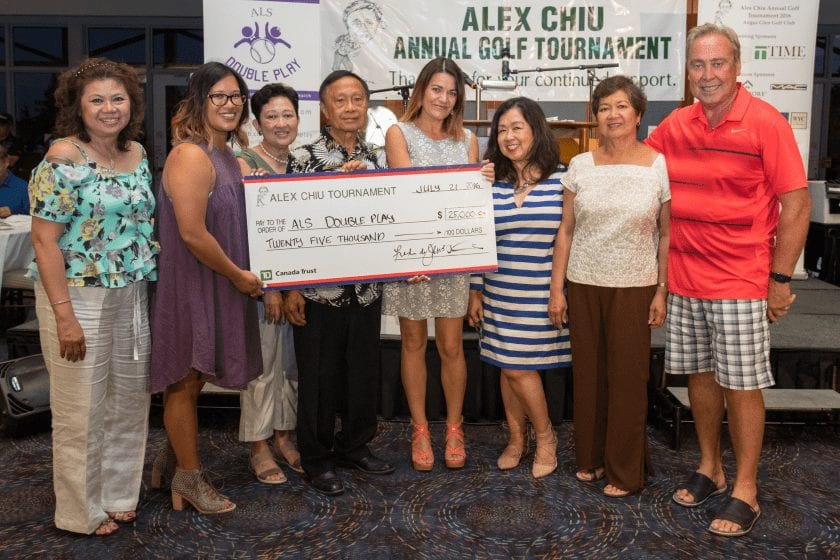 The Alex Chiu Golf Tournament enjoyed another successful event with proceeds going to two worthy recipients. Completing their pledge to Mackenzie Health of $250,000, the tournament proudly presented $150,000 for the building of a new York Region hospital. ALS Double Play received $25,000 for ALS research, a cause close to the Chiu family.

“What a great day for the Alex Chiu Tournament. We are grateful that we get to connect with the community at this tournament and overwhelmed by the support we have received. Today we are young charity with big dreams to make ALS history; with friends and supporters like ours, that day will come sooner than we know,” said Cherrie-Marie Chiu, president and founder of ALS Double Play.

While tournament day is all about connecting with the community, and maybe even doing a little business, Alex does this for one reason, to give back. Over the 17 years, the tournament has supported many worthwhile causes. Some of the more notable include Sparky’s Apartment and the Multicultural Friendship Centre at the York Regional Police’s Safety Village; Southlake Regional Health Centre; Markham Stouffvile Hospital’s expansion; YMCA Markham; United Way of York Region and Power Unit Youth Organization.

Alex and the committee are also proud of “Markham Village” in Las Pinas, Philippines. Through the tournament, enough money was raised to build a village of

51 homes and a community centre for homeless people who lived in slums outside of Manila. Alex named the village after Markham.