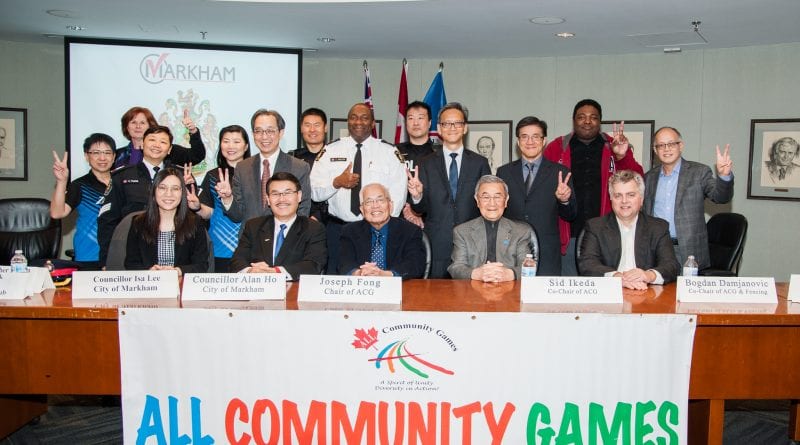 The name really says it all.

As June begins, so too do the All Community Games, an event that spans several weekends in the month with hundreds of athletes of all ages competing in multiple disciplines.

Founded 15 years ago by Sing Fai Sports Club, which has also sponsored the Chinese women’s national volleyball team in its trips to Canada, the All Community Games have become a staple in Markham and the rest of York Region.

“Originally, it was supposed to be the Asian Community Games, but we changed it to the All Community Games,” chairman Joseph Fong said. “The reason why was that people were complaining that it wasn’t open to all Canadians, but it actually is.

“The name made that hard for people (to realize) that, so two years ago, we changed the name to All Community Games, since we serve all of the different communities in Ontario and other provinces.”

This year, there will be competitions in basketball, badminton, bowling, fencing, volleyball, soccer, and swimming, with the latter two taking place on the opening day (June 1) in Markham.

Those events will begin shortly after the opening ceremonies, which will be held at the Markham Civic Centre earlier that morning.

“During the opening ceremony, we have entertainment as well,” Fong said. “We have a tae kwon do demonstration, tai chi demonstration, a children’s choir, and more.”

There are also over 200 kids from scout groups from around the area that will participate, as part of a partnership that has gone on now for a number of years.

The All Community Games and Scouts Canada both feel strongly about increasing physical activity for youth.

“My goal with this is to help the community and encourage more exercise,” Fong said. “Nowadays, in the computer age, everyone prefers to play on their cell phone or computer than exercise. In fact, exercise is not an easy thing to convince people to do. You have to do it consistently, and practice your (discipline).

“I play sports as well and understand that,” Fong added. “If you don’t exercise, no matter how old or young, you’ll have lousy health. We try to encourage people to get out and move, as do our sponsors.”

The age range for the All Community Games is truly all-encompassing, as there are competitions for those eight and younger, as well as a number of them for 40-plus athletes.

A lot of work goes into planning the events, many of which require a lot of forecasting.

It’s a labour of love for Fong and his fellow volunteers.

“We’re a non-profit organization,” Fong said. “No one, including myself, gets paid. We have to book the gyms and fields a year in advance, and if we don’t have enough teams, we have problems. That’s something that not everyone will be willing to organize.

“It’s not easy, but we are fortunate that we get support from the City of Markham, as well as Richmond Hill, Toronto and Vaughan.”

Along with hosting the opening ceremonies, Markham will welcome in more competitions than any other city this year.

The soccer tournaments will take place at Unionville High School (for the adult divisions) and Berczy Park (U9) on June 1.

On the same day, the Cornell Community Centre will be packed with over 300 swimmers for a multitude of events, split into five different age groups and separated by gender.

Registration for a number of events is still open and can be completed online at acgames.ca.