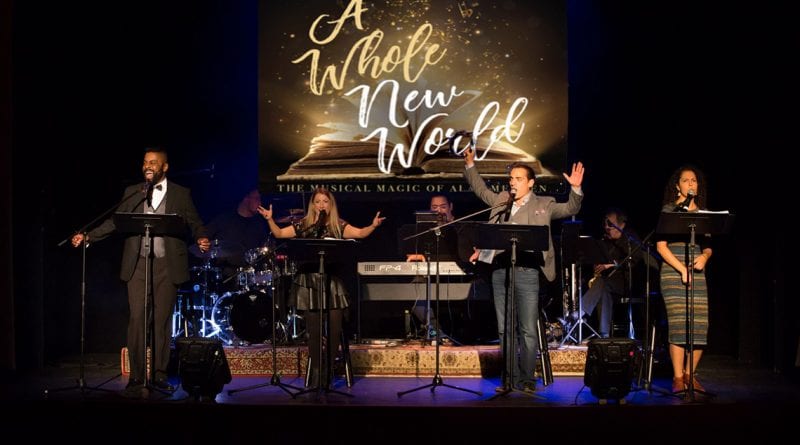 After the overwhelming reception last year of Any Dream Will Do, the musical documentary about Andrew Lloyd Webber, the same team is back in Markham this year giving the same treatment to Alan Menken. A Whole New World:The Musical Magic of Alan Menken explores the life and work of the musical powerhouse behind The Little Mermaid and the resurgence of Disney that followed.

Presented as part concert, part docudrama, and part storytelling set to music, creator Adrian Marchuk has reimagined Menken’s work to accompany the story of his life’s work and the recent Disney renaissance by four powerhouse voices. Backed by a fantastic 3 piece band, the show also features a multimedia presentation that traces every inch of Menken’s life, work, and the life he breathed back into the movie musical.

“Adrian has a special knack for taking the audience on a journey through the lives of great composers,” says the show’s Producer, Brian Goldenberg. “It’s like watching a musical documentary come to life onstage.”

Of course, memorable songs like A Whole New World, Beauty and the Beast, Part of Your World, Suddenly Seymor, Be Our Guest, Kiss The Girl, Go the Distance, and Friend LIke Me, all make show stopping appearances.

These classics will be brought to life by Canada’s strongest musical theatre voices. Marchuk himself will be joined by Thom Allison, a Broadway Alumn as well as part of the original Canadian companies of Miss Saigon, The Who’s Tommy, and Rent; Elena Juatco, who sang Eponine in the recent revival of Les Miserables; and Evangelia Kambites, fresh off her performance in Menken’s Little Shop of Horrors at Stratford.

“This cast is incredible!” says Goldenberg. “Alison and Juatco are thrilled to be back and the creator Marchuk is a force onstage. Kambites has just finished a run on Little shop at Stratford and is sure to thrill”.

Music Director Scott Christian and Goldenberg himself might be recognizable to some audience members because they spent their formative years in Markham. Both had their first experiences in theatre with local company Markham Youth Theatre and as students at Unionville High School right on the FlATO Markham Theatre stage.

The show was originally commissioned from Marchuk, who will be known to audiences from his turn as Frankie Valli in the Toronto production of Jersey Boys, by Theatre Collingwood in October 2018.

“It’s a night of musical theatre for the whole family that will leave you feeling as hopeful and happy as Alan Menken is today,” says Goldenberg. “The audience is going to learn fascinating stories they never knew about how their favourite movie musicals were made.”

A Whole New World: The Musical Magic of Alan Menken is being presented at the Flato Markham Theatre on December 6.