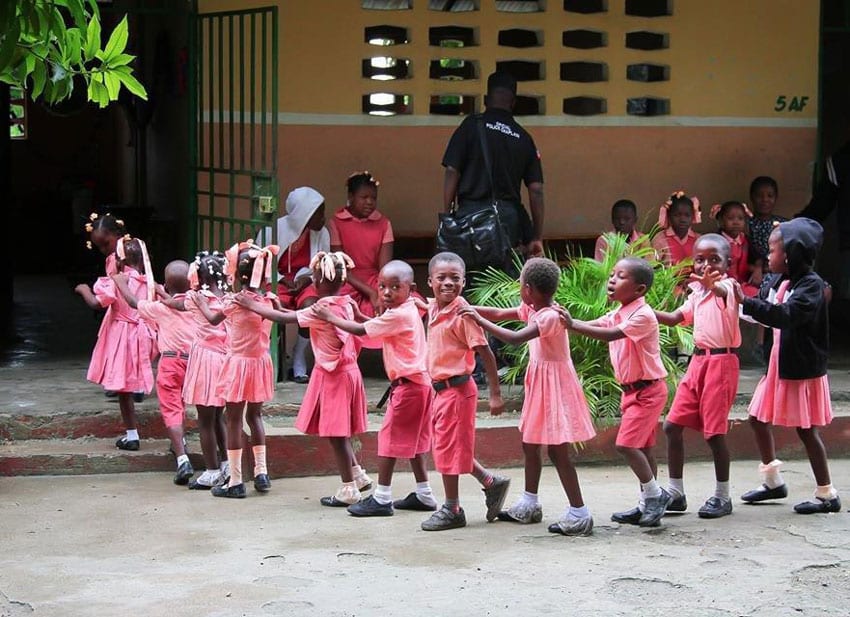 She runs the pharmacy side of the medical team clinic with another volunteer, receiving her training on her first two trips. The program is operated by Mission to Haiti Canada (MTHC), formed in 1997. The local parish supports the project with member donations of funds, needed items and volunteers. Everyone travelling to Haiti pays their own way.

Donations of food, medications, building supplies, clothing, shoes and other necessities along with gift boxes for sponsored children are shipped down ahead of the mission, planned to arrive early in the first week of the trip. The base is located in Cabaret, approximately 90 minutes from the airport at Port au Prince.

The team sets up medical clinics at a total of seven different locations, loading a truck with everything needed for the day and travelling to the sites. The nurse volunteers and team serve 170 to 200 patients a day – babies to elderly – dispensing medications and vitamins from donated supplies. A local dentist makes the trip and serves up to 80 patients during the clinics.

“There are some heartbreaking situations,” says Schmidt. “We meet people who haven’t eaten for a couple of days, or (usually elderly) people with no means of support, even a mother who went through garbage dumps to get food for her seven kids. We give those people food bags, sometimes money, anything that we have that can help.”

Then, there was the story of a man who walked into a church before the start of the service carrying a baby. He placed the newborn on the lap of the first woman he saw and walked out.

But Schmidt has been witness to some near miracles as well.

“A baby boy and a toddler girl were left on at a dump one November, while we were still there,” she said. “They were brought to the orphanage on site, but the baby was badly dehydrated and in bad shape. MTHC hired a nurse for him, but expectations for survival weren’t high. When we returned in January, Christopher was thriving and lively and his sister Anastasia was doing well.  Now, they are both sponsored and in school, fit and well.”

Why did she get involved?

“It was a bucket-list thing that had been in my heart for a number of years,” she said. “The year that I retired was my opportunity. I expected to hate it – the heat, dormitory living, cold showers etc. That was November 2012.

“There was a last minute space on the January 2013 team and I couldn’t wait to get back there.”

She and her husband started sponsoring an orphan in Haiti in early 2012, sending funds to offset orphanage and school costs. Volunteering on the mission trips was an opportunity to see him.

“I have watched him grow up over the years,” said Schmidt. “He calls me ‘Mama Sue’ and although I only see him for a couple of hours a trip, it is so awesome to hug him and hear his news.”

There are more than 200 sponsored school-age children sponsored through MTHC. They also identify new children in the community who need sponsorship in order to get into school.

Main photo: Kindergarten kids in Haiti line up for school. 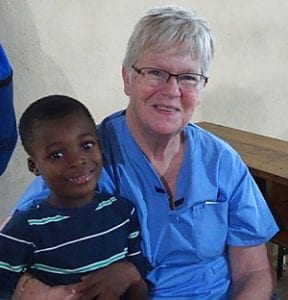