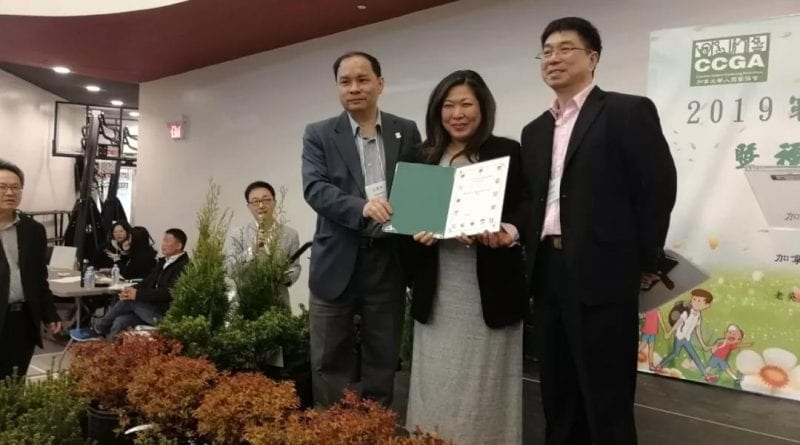 The 9th annual Toronto Horticultural Show took place at 105 Gibson Drive on Saturday, May 11th. Around two thousand people registered for the annual event, but approximately three-thousand people showed up.

The founder, Jim Yao of the non-profit Canadian Chinese Horticultural Association was the chief organizer. Xi (Sidney) Liu as Vice President said that the Horticultural Show had come a long way since its beginnings more than ten years ago. “When I came to Canada in the early 1990’s people would grow plants in their homes over the winter and then exchange seedlings in the spring. We used to meet at Sunnybrook Park, but over the years we had too much to transport and we couldn’t count on the weather. We needed a place indoors that could accommodate many people and attract businesses. This is our first year at the Gibson Centre.” The Association’s event had attracted thirty-eight sponsors including farmers, importers/exporters, landscaping, insurance, and real-estate companies and had ninety-two volunteers.

Vendors included Ocean Nursery, Av Greenhouse, Royal Bee Honey, a second-generation farm in Newcastle and Happy Farm outside Hamilton that produced honey and eggs. There were natural drinks from Chengdu, Haitai seeds for oriental vegetables, home-baked goods, and many varieties of plants and flowers for sale.

Linda Lin explained that one of the aims of the event was to educate the Chinese community about gardens. “Many people from mainland China didn’t have yards or gardens and didn’t know how to take care of them when they came to Canada. The Horticultural Association has helped to educate them about how to grow trees, shrubs, and flowers. Also, people often grow more Chinese vegetables than they can eat, so we became a platform for them to exchange cucumbers, peppers, . . .” Mr. Liu’s plan is to increase cooperation with the local gardening community, with other associations such as Orchid, to celebrate Earth Day with the City of Markham, and continue to promote gardening.

There were many speakers and guests including City Councilor Jim Karygiannis, MPP Vincent Ke, MP Geng Tan, and the Consul General for the PRC in Toronto. MP Mary Ng for Markham-Thornhill said in good spirit that growing beautiful plants at the start of the season means prosperity for the rest of the year. City Councilor Alan Ho predicted that event would, “Make Markham beautiful.” The Toronto Horticultural Show is held yearly the week before Victoria Day weekend.

Photo by Hanbo Zhang. Thanks to Sarah Song