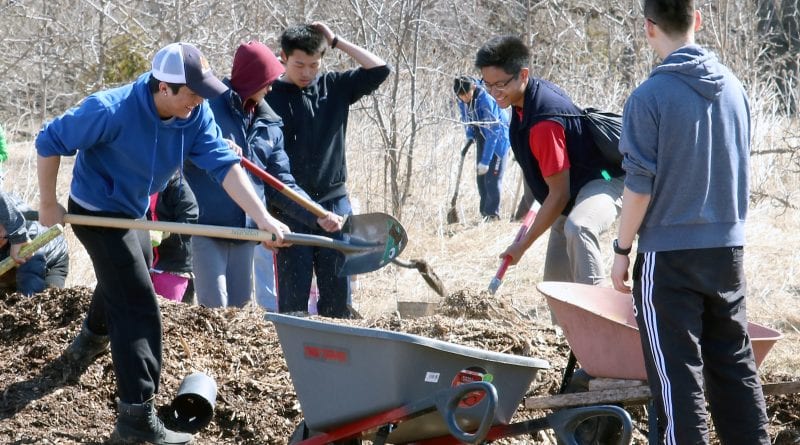 For three decades, Markhamites have been getting their hands dirty—literally—to bolster the community’s wildlife. Despite the milestone, the work continues for 10,000 Trees, the not-for-profit group dedicated to restoring natural habitat within the Rouge Valley.

Despite the name, 10,000 Trees is about much more than simply arboreal sowing. Grass, wildflowers, shrubs and even nut trees are among the myriad plants that will be finding homes in the 5.7-acre tract of land southwest of Major Mackenzie Dr. E. and McCowan Rd.

Group chairman Robert Roszell expects the annual spring planting on April 28 to have upward of 3,000 volunteers, based on numbers from recent years.

It’s important work, but it doesn’t require any prior knowledge or training, Roszell said, though he did note that people should wear waterproof footwear and gloves, and bring a spade or shovel.

As available green space becomes harder to find in Markham and as opportunities for year-round advocacy become more apparent, Roszell said his organization has taken a fresh look at its mission statement and goals in recent years, concluding its core philosophy—to rally the community to get plants in the ground each year—is as important now as it was 30 years ago.

Though there will be some dignitaries present for the anniversary, Roszell said it’ll be “business as usual.”

“Our goal is to offer a one-day planting event for anyone who wants to come out,” he said. “Most of the people who have come out have come out for years.”

Roszell said the event may have to expand to a two-day plant in the coming years to accommodate growth, though he noted it still takes about nine months of the year to plan the event as it is. Despite the growth, the organization still remains entirely volunteer-run. Management and administrative expenses come in at zero. That means every dollar is going into the ground, which has been as much a source of pride for the 10,000 Trees team as the many hectares it’s covered in foliage.

“We’re very proud of the fact that we all volunteer our hours,” Roszell said. “We’re all working management. We want to get our hands dirty and I think that’s what’s made it so successful—the engagement of the board of directors. Every one of them is engaged and doing what we’re doing. Even though we’re out there managing it we still want to put plants in the ground.”

There’s no parking at the planting site, so volunteers will start their day at the Mount Joy GO Station, where ongoing shuttles will ferry them to the tract. After getting checked in, planting managers will walk volunteers through the steps of a successful plant.

It’s the same formula that’s been working for 30 years, Roszell said, noting he’s keeping on with it.

“It’s something I believe in,” he said. “It’s the environment. That’s what this is all about. We cannot get enough plants in the ground to offset what’s being destroyed out there due to deforestation and plastics that are running the environment.”

Volunteers can register on-site the day of the event, or pre-register at 10000trees.com.