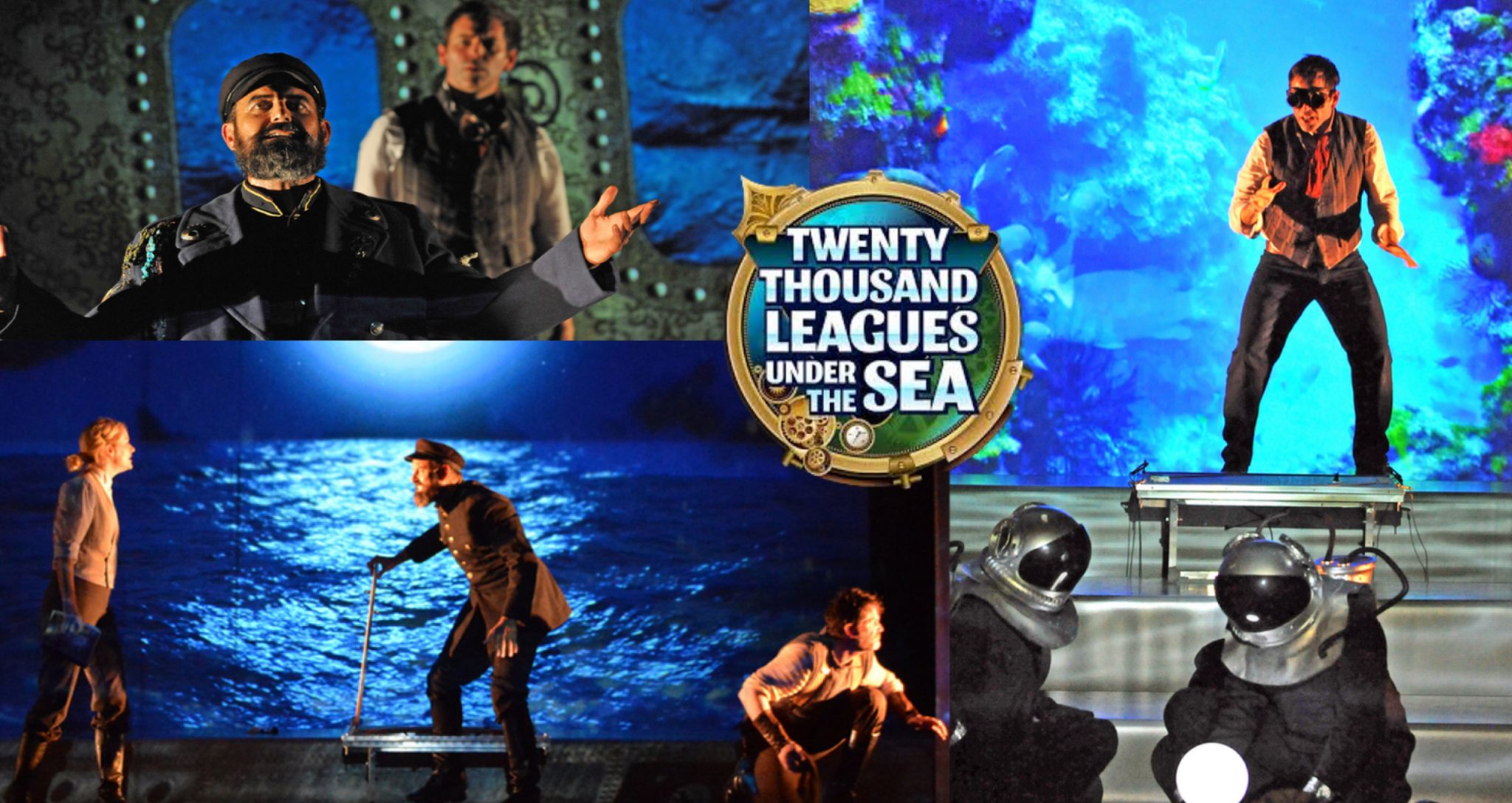 Science fiction has always been concerned with going where no man has gone before, but before the obsession with outer space and the far reaches of the galaxy, writers cast their imagination toward the unknown mysteries of exploring the earth.

Nineteenth-century writer, Jules Verne laid the foundation of modern science fiction with Journey to the Centre of the Earth in 1864. His follow up, Twenty Thousand Leagues under the Sea (1870), captured the imagination of the world. Now, nearly 150 years later, the story still seeks to thrill audiences, this time through a new stage adaptation of  Captain Nemo’s harrowing adventure.

“I loved the novel when I was a kid!” says Craig Francis, the show’s co-creator and stage manager. “He was original Sci-Fi. He took cutting-edge technology, saw where it was going, and had a global vision.”

This adaptation was co-written and directed by Rick Miller, whose work has toured five continents in three languages. Audiences in Markham will remember his work in the solo shows MacHomer (a mashup of Macbeth and the Simpsons) and BOOM. Those shows were also known for making much out of imaginative stagecraft and projections.

“It’s a fast-paced, super-fun retelling of the undersea adventure,” explains Miller. “We use multimedia in creative, immersive ways, while also commenting on technology itself, and how we use it today.”

This new version of the story features a narrator named Jules, a character who was named after the aforementioned famed writer. The modern Jules is a university student who has spent seven years studying the collapse of the ocean’s ecosystem but he decides to reset the clock to 1868 and tell his own version of the Verne classic in the hopes that his hero Captain Nemo will help him disconnect from humanity completely. But the mysterious Nemo has his own agenda, whisking Jules and Professor Aronnax,  aboard the Nautilus for a journey of wonder and danger.

The show unfolds from the narrator’s mind as a steampunk illusion. The mix of projections, miniatures projected to life size, beautiful lighting and captivating performances by three actors tackling multiple roles bring the story to life.

Many of the issues that Verne wrote about in 1870 remain with us today. The show addresses colonialism, whaling and conservation, and even overuse and pollution of water. This new production expands this visionary perspective as the characters explore Earth’s oceans.

“ I was really overjoyed with how exciting it ended up looking and sounding.,” says Francis. “ It’s thrilling to experience a whole epic story brought to life with just 3 actors, high-tech and low-tech special effects, in real time in front of a live audience!'”

The responsibility of making a complex and engrossing show that seemed to appear out of a single actor’s mind fell largely to projection designer Deco Dawson and composer Richard Feren.  Elements pop up or down or sometimes descend from pulleys. Layers of projections, from three different machines, playfully jump from small scale to large scale. Ambient sound plays throughout. The idea is to play tricks with the audience’s mind.

It’s no small task for the cast of three, Jesse Nerenberg and Richard Clarkin from Toronto, and Katie Melby from New York, to bring their presence and performance up to the level set by the show’s technology.  Jesse plays the modern-day narrator Jules, plus a whole bunch of other colourful characters, as he narrates the story – sometimes acting with action figures into a live video camera. Katie plays Professor Aronnax, and Richard plays the infamous Captain Nemo.

“One of the hooks that drew us in was that back then Captain Nemo was so distraught by what was happening on land that he escaped and created a paradise under the sea,” explains Miller.

“It really resonates today, says Francis. “Imagine Captain Nemo knowing that species he was just discovering would be driven to the brink extinction.”

“That’s our framework, our jumping off point for the piece,” continues Miller, “and how we bring it home with a sense of hope, and a call to action!”

The Flato Markham Theatre presents 20,000 Leagues Under The Sea at 2 and 7 p.m. on Dec. 28. Visit www.markhamtheatre.ca for more details.