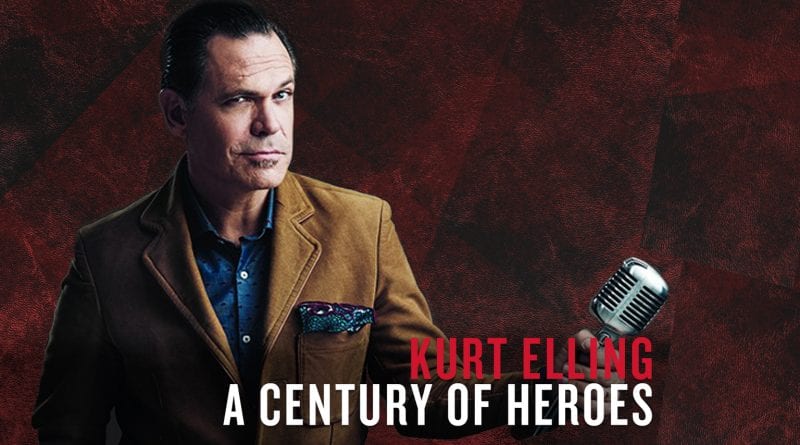 If one is lucky, post-secondary school includes a life-defining moment that reaffirms choices and inspires a successful career. If you’re Grammy award-winning jazz singer Kurt Elling, it can be quite the opposite.

After spending years studying, Elling turned in his final paper at the University of Chicago’s School of Divinity, and was told flatly by his professor that his paper was nonsense. The professor further claimed that Elling’s work was beyond comprehension.

The fact that he had been out until 3 a.m. the night before singing jazz with Chicago legend Von Freeman and having the time of his life might have had something to do with it. It seems that his heart knew something about his future before his head did. Unsurprisingly, music was where Elling would focus his efforts from then on. In early 1992, he dropped out of school to begin a journey that would lead him to a life in jazz.

Elling’s journey brings him to the Flato Markham Theatre to perform A Century of Heroes on October 7, rescheduled from the spring because of the COVID-19 pandemic.

It’s a show paying tribute to those who helped shape the genre ahead of Elling himself, including Sinatra, Nat King Cole, Ellington and John Hendricks.

“It’s a great project,” said Eric Lariviere, general manager of Flato Markham Theatre. “We were lucky that he was available for our Jazz series and with this show, bringing him in was a no-brainer.”

Elling and his band will have a set that includes the Count Basie/Jimmy Rushing classic Goin’ to Chicago, Eddie Jefferson and Arthur Johnson’s Penny’s From Heaven, and Buddy Johnson’s poignant Save Your Love for Me, which the audience might remember from recordings by artists as diverse as Boz Scaggs, Nancy Wilson, Lou Rawls and Etta Jones.

The choice of songs is designed to draw in both casual listeners and jazz devotees alike. Elling also says that he’ll explain a bit about the artists he’s paying tribute to and why he chose them as part of the show, but he’s quick to counter with a promise that the show won’t be a lecture series either. He promises a swinging night of music.

“We absolutely cherish the jazz audience we’ve managed to attract at the theatre. We want to bring them nothing but the best,” Lariviere said. “Elling is one of the great North American jazz singers. He’s certainly the best of his generation.”

The son of a church organist, Elling developed one of the most naturally powerful voices in modern jazz by singing in choirs as a child to congregations of hundreds, without microphones. As Elling himself explains, he was forced to make his presence known through deep expression and surprising volume. These lessons that most singers struggle to learn for decades, Elling learned from necessity before he even hit high school.

Once he left school, the pianist at the old Milt Trenier’s basement club in Chicago, Karl Johnson, became a friend and mentor and in 1995, a demo album cut with pianist Laurence Hobgood led to a deal with Blue Note Records, the prestigious jazz label.

His debut album, Close Your Eyes, got him his first Grammy nomination for Vocal Performance, and ever since, he’s continued to both write original music while exploring new ways of transforming instrumental classics by singing in his inimitable baritone style over them.

The Markham show will also include Nature Boy, by Nat King Cole, and while Elling pays tribute with the selection, he also extends the classic into new musical territory. This ability, to both salute and re-invent, has become a calling card in his career. He won a Grammy for doing this very thing with John Coltrane and Johnny Hartman’s work. This, along with 10 other Grammy nominations, indicates that Elling may have made a pretty good choice when he left school.

“People always expect great international artists from the jazz series we’ve developed here in Markham,” Lariviere said. “With Elling, we’ve managed to get just about the best out there.”

Photo: The Kurt Elling Quintet are set to perform A Century of Heroes at the Flato Markham Theatre.