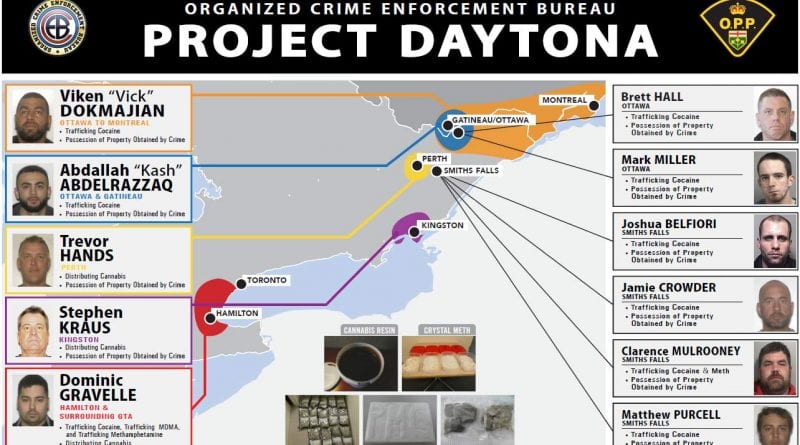 Several residents from across Ontario, including the Greater Toronto Area (GTA), East Region (Ottawa, Smiths Falls, Perth and Kingston) and one in Quebec are facing numerous charges under the Controlled Drugs and Substances Act (CDSA), Criminal Code of Canada&nbsp;and the Cannabis Act after a complex investigation concludes.

At a news conference today, OCEB Director Superintendent Bryan MacKillop and OCEB Major Case Manager Detective Inspector Peter Donnelly unveiled details of the investigation and a display of the evidence seized during the investigation. On January 22, 2020, police executed two warrants in Stoney Creek and Burlington, and an additional six warrants on January 23, 2020, in Ottawa, Carleton Place, Smiths Falls, Perth and Gatineau, QC. Members of the Emergency Response Team (ERT) and Tactics and Rescue Unit (TRU) assisted with the execution of the search warrants in Ontario, and Service de police de la Ville de Gatineau (SPVG) assisted with the execution of a warrant at a location in Gatineau, Quebec.

During the course of the investigation, the team combined to seize 8.5 kg of cocaine, 9 kg of methamphetamine, 4 kg of ecstasy, more than 100 pounds of cannabis, 8.5 kg cannabis concentrates and $30,000 in Canadian currency.

Twelve people have been charged with 81 offences. The accused were held in custody upon arrest and are expected to appear at an Ontario Court of Justice in various locations on various dates. The investigation continues.