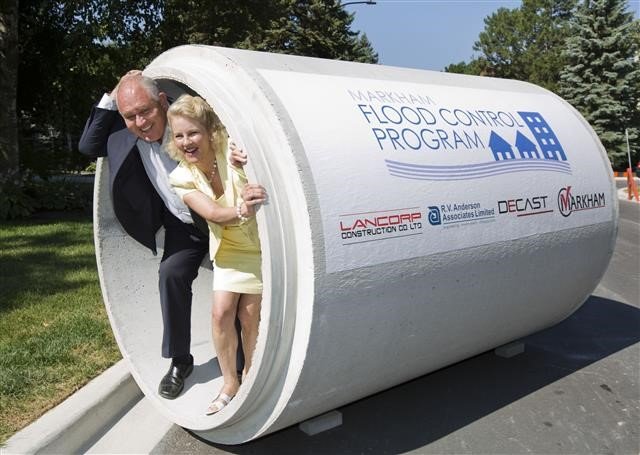 Markham celebrates flood control program milestone with the completion of Phase 1 of the West Thornhill Project.

Mayor Frank Scarpitti was joined by Members of Council, representatives of project design firm R.V. Anderson JAssociates Inc. and construction contractor Lancorp Construction Company Ltd., and residents of the Bayview Glen neighbourhood to commemorate the completion of the first phase of Markham’s Flood Control Program in West Thornhill on July 27. This community was identified as the highest priority in the City of Markham through a comprehensive study and planning process that began in 2005.

In August 2005, during a severe rain storm, stormwater runoff exceeded the capacity of West Thornhill’s drainage system. This caused extensive flooding to private property and roadways. As a result, the City of Markham undertook the West Thornhill Stormwater Flood Remediation Class EA Study, which identified system improvements to increase capacity and reduce flood risks. The study received Ministry of the Environment approval in August 2011 and an implementation strategy was adopted by Markham council in October that same year.

The first phase of work began in the Bayview Glen neighbourhood as defined by the strategy, which identified the phases of design and construction to be undertaken throughout West Thornhill on a flood risk priority basis.

Phase One has been a massive undertaking over the past two years, and has included:

All of this required moving almost 36,000 tonnes of earth and the reconstruction of about 1.6 kilometres of roadway.

“Infrastructure renewal on this scale is extraordinary in municipalities,” said Mayor Frank Scarpitti. “But it is necessary and reflects Markham’s commitment to flood protection, which has always been a high priority. It is even more important today as we face the impacts of climate change.”

While this first neighbourhood is largely complete, work continues throughout West Thornhill.